book review: what happens in london 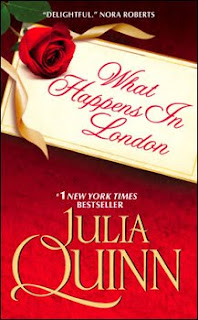 From the back cover: "When Olivia Bevelstoke is told that her new neighbor may have killed his fiancee, she doesn't believe it for a second, but, still, how can she help spying on him just to be sure? So she stakes out a spot near her bedroom window, cleverly concealed by curtains, watches, and waits... and discovers a most intriguing man, who is definitely up to something.

"Sir Harry Valentine works for the boring branch of the War Office, translating documents vital to national security. He's not a spy, but he's had all the training, and when a gorgeous blonde begins to watch him from her window, he is instantly suspicious. But just when he decides that she's nothing more than an annoyingly nosy debutante, he discovers that she might be engaged to a foreign prince, who might be plotting against England. And when Harry is roped into spying on Olivia, he discovers that he might be falling for her himself..."

I picked up "What Happens In London" while grabbing some groceries at the store. It was a week before Valentine's Day, my love life has been stagnant and I thought I might live vicariously through some fictional characters for a couple of hours. I have read Julia Quinn's books before and enjoyed them. This book did not disappoint.

Right now I am focusing on characters in my own work, so I will focus on the ones Quinn created for the book.

The two protagonists — Lady Olivia Bevelstoke and Sir Harry Valentine — are quirky, fun and compliment one another well. Unlike most of her contemporaries, Lady Olivia enjoys reading the newspaper and staying up-to-date with current affairs. Sir Harry is studious and fluent in several languages. Quinn consistently gives her characters distinguishing personality traits, which I find admirable. I will have to tuck that bit back for my own character development.

I also appreciate that Quinn creates strong female leads that fit within the constraints of what was socially expected of the time frame. These women are independent, have their own goals and are likable. It can be easy in the romance genre to create static female leads, but Quinn follows the Nora Roberts' approach and designs her men and women leads to be more progressive.

The supporting cast provides additional comic relief. Their family members bicker, are overly dramatic and like to give the protagonists a hard time. That always adds some much-needed amusement.

The protagonists meet under unique conditions (unique for a beach read, that is). Sir Harry catches Lady Olivia spying on him, and their relationship develops over conversations spoken from their respective second floor windows. They continually get themselves in awkward social settings, but the reader can see a genuine emotional relationship developing outside of the physical one that inevitably develops in a romance novel.

I could probably go into more detail on this book, but I waited a while to write the review and I feel like going and doing something else with my day, so I will just end this post by saying this: I enjoyed this book. I would recommend it. I would read it again. Excellent characters with witty dialogue. The only thing off is the book title (although Quinn's book titles usually take some sort of spin on more modern pop culture references, so I will let it slide).