Although Sept. 2 marks the end of my career as a faux Texan, I have made many memories along the way. To commemorate the past 14 months of my life, I will countdown my top 10 "Most Memorable Moments," as a Texan, beginning with... 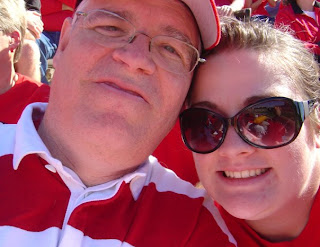 The University of Nebraska Cornhuskers through the smack down on the Baylor Bears in Waco, Texas, Oct. 31, 2009. My dad, myself and our fellow NU fans were there to witness this humiliation.

Not only did Nebraska win big, but I'm pretty sure we had more fans there than Baylor.

In all fairness to our soon-to-be-ex-conference mates, football really isn't Baylor's sport, and Texas is filled with Nebraskans who usually only get one game in their state a year (which will stop happening in all likelihood when NU joins the Big 10 in 2011).

The day started off well. My dad (who was in town for the weekend) and I woke up early and drove to Waco. Along the way, Dad used his handy little Blackberry to look up facts about the Branch Davidians and we brainstormed costume ideas for that night. 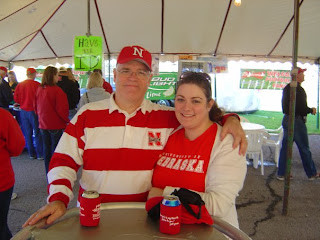 We arrived in Waco before 10 and promptly started drinking beer, like all good Husker fans do. As my brother Mike always says, "I love early kick-offs. It's the only time it's socially acceptable to drink beer at 8 a.m."

We hung out at one of the many tailgate parties for Husker fans and watched Husker football Texas-style.

In addition to being a fun day with my dad and a chance to see my 'skers play, this game was also my first Nebraska away game.
Dad and I had such a good time in Baylor, we decided we want to do another away game. This fall, Mike, Dad and I will attend the NU vs. Texas A&M game in College Station, Texas. Even though I won't live down here, and it'll make for quite the road trip. I can't wait.

Check back tomorrow for No. 9 of "My Most Memorable Moments — Texas edition."
Posted by Laura Chapman