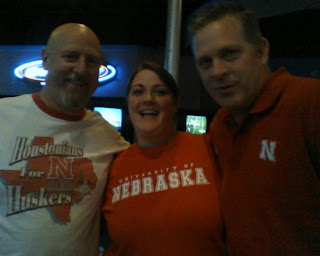 Being away from home this fall was hard. It was the first time I'd been away from Nebraska during Husker football season.

I was home with family to go to the first game of the season, but I needed a place to watch the second. I found it at the SRO, where the Houstonians for Huskers meet for every game. Some of us were Nebraska natives and alumni, others were just big fans.

We cheered in good times and did rally shots during the bad. And it was always a lot of fun. 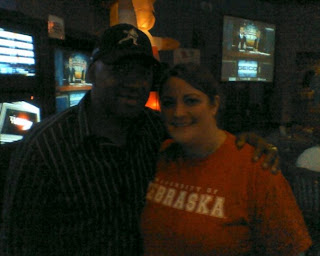 In addition to being a way for me to watch my team with people who love them as much (or almost as much as me), there were also a lot of fun moments. I won a t-shirt (which was a child's size, so I sadly could not wear it), and I also got to watch one of the games with special guest Mike Rozier. Here I am pictured with him.

All in all, it was nice to have an adoptive Husker family away from home.
Posted by Laura Chapman