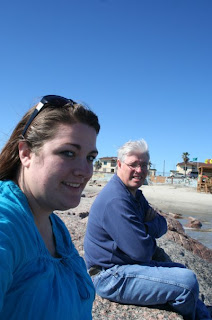 During my year in Houston, some of my favorite moments were the times my father came to visit me.

We went to a Nebraska football game in Waco, Texas. We celebrated Halloween at bars in Downtown Houston and The Woodlands. We saw NASA, Galveston Bay, Museum of Natural History and the Houston Symphony.

I was lucky enough to have him visit me four times — two of those on his own during interludes in business trips. It's hard to say in words how much it meant to me to have him there. Not only was he a much-needed reminder of home and what I have waiting for me back in Nebraska, but he also was an excuse for me to be a tourist in the city that I lived for more than a year.

Thanks for the memories, Houston. It's time to head back north. 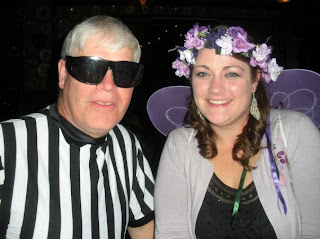 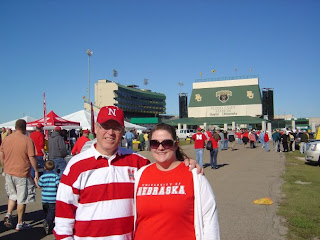 no. 2: the hangover part two 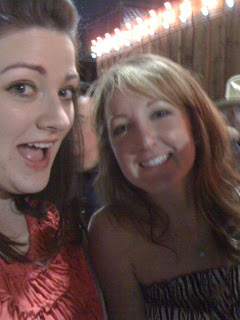 No. 2: The Hangover Part Two

You've seen "The Hangover," right? Well, have you lived it? I haven't, but one night in February, I came pretty close.

I guess I should start from the beginning. Once upon a time...

On a February night, my friend Cathy and I decided we wanted to check out the barbecue that precedes the Houston Livestock Show and Rodeo. For those of you who don't know, the Houston Rodeo is one of the biggest rodeos in the world. This year, attendance was more than 2 million. The barbecue itself brought in more than 220,000 people. So knowing all of this, we figured us Nebraska transplants should probably check it out.

We had no idea what to expect. For this reason, we ended up stuck in traffic for two hours and spending another half hour finding parking (which we eventually did in a McDonald's parking lot). Not wanting to get towed, we each got a hamburger and walked to the rodeo grounds. In hindsight, getting those hamburgers probably saved our lives, because by the time we got to the event, they were no longer serving barbecue.

Cathy had some VIP passes for a few of the parties that are held at the barbecue. We decided to check out the biggest one first, and stood in line for a while. 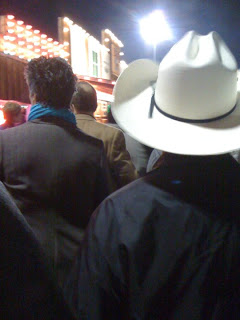 While we stood in that line, Cathy looked around her and saw what people were drinking.

"Laura, am I going to have to drink domestic beer?"

As a bit of a beer snob, she seemed upset to see everyone throwing back Miller Lites. And while I didn't want to distress her anymore than she already was, I knew I couldn't keep the truth from her forever.

"Cathy," I paused, thinking of how best to put it. "Not only will you be drinking cheap American beer tonight, but it's probably going to be out of a can."

I could tell this was hard for her to handle, but I myself was thirsty and just wanted the line to move more quickly. I was also busy checking out all the cowboy hats, and feeling some envy that I didn't have one of my own. Sure, I was rocking my fabulous brown cowboy-style boots and jeans, and while — for one of few times in my life — I knew I looked good I just didn't feel country enough.

Cathy and I promised each other we would wear cowboy hats at some point that evening.

We finally made it to the front of the line. The bouncer, an older gentleman with salt-and-pepper hair and a handlebar mustache carefully guarded the door.

As a true southern gentleman, the old cowboy pulled a couple of beers from his own personal stash and offered them up to Cathy and I.

We finally made it through the door, and I took a moment to appreciate the scene. A country band played on the stage, and people crowded the dance floor, two-stepping, or whatever it is people do in Texas. A good crowd also surrounded the bar — where booze was free — and I knew we were going to have to stock up on rations if we wanted to have a good time.

Being close to Mardi Gras, I also saw many people wearing beads. For whatever reason, this year I was obsessed with collecting strands of Mardi Gras beads, and I knew at some point I was going to have to get my hands on some. I didn't wait long.

On the way to the bar, I bumped into a nice young man wearing several strands.

"What did you have to do to get those?" I asked.

With a smile and a wink, he pulled off a strand and put it around my neck. He said something, but unfortunately I don't remember his exact words. I do remember thinking it was clever.

I admired my beads while we waited at the bar. I told Cathy we would need to find someone tall to help us get drinks, and a nice tall man in front of us overheard, and promptly ordered us a couple of drinks.

Impressed, we gladly accepted, but I also knew one beer each wasn't going to get us far. So the man helped me elbow my way up to the front where I caught one of the bartender's eyes. 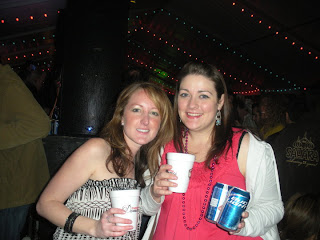 "Four beers, please. And how about two shots of Patron, and two glasses of whatever everyone else is drinking?"

The obliging gentleman filled my order, and as we exchanged smiles something passed between us. I knew we weren't going to have to wait in line to score drinks the rest of the night. Based on the outcome, my guess was correct.

Having since made friends with another young man — this one visiting from Dallas — the three of us raised our tequila in toast.

"To the Houston Rodeo," I said, then threw back my drink. "Now let's get drunk."

What followed was a blur of fun and excitement.

The next clear thought I had was at 1 p.m. the following day. I woke up on my living room floor feeling exhausted and sick. I also wore my boots and shirt from the night before.

And I noticed I now sported about 10 strands of Mardi Gras beads and a cowboy belt — none of which I had prior to my mayhem the night before.

As I stumbled about my apartment, trying to ignore my reflection in the mirror, I knew I needed answers. I found my jeans near the door, my jacket close by. When I finally found my purse, I opened it looking for clues. It held my wallet and cell phones — thank God — more Mardi Gras beads, a gift certificate for dinner for two to a barbecue place and a can of beer.

Even as some guilt settled in, because I knew I had gotten out of hand and been reckless the night before, I also started to feel something else. Not quite pride, but quiet amazement.

I so seldom really cut loose, but after looking through my purse of one thing I was sure: I'd had a blast.

Using our vague memories, purses and cameras for evidence, Cathy and I were able to piece together the rest of the night. 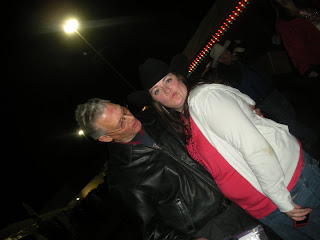 Some of the happenings are better left unsaid, but here are a few tidbits:
• Cathy and I made friends with the nephews of the party's sponsor — a local barbecue joint. After we shared our sad story about missing out on all the barbecue, they gave us gift certificates to the restaurant.
• Our new friend from Dallas gave us cash to cover the cost of the cover to enter the barbecue.
• A nice young man taught us to two-step. At least he tried to.
• As we left the party, I bumped into a girl wearing what I apparently thought was a fantastic belt. I told her, and she took it off and gave it to me.
• We both wore several cowboy hats that night as we wandered the barbecue's grounds. Most of the obliging gentlemen to share their hats with us were old enough to be our fathers.
• Near the port-a-potties we made friends with a group of people who did a mini-photo shoot with us. They also gave me lots of beads.

All in all, Cathy and I learned valuable lessons at the barbecue. First, everything really is bigger in Texas — including barbecues — and you have to be careful if you decide to mess with it. Second, we all really do have a hillbilly bone down deep inside. Third, sometimes, you just have to cut loose from your uptight ways and live a little.
Posted by Laura Chapman No comments: