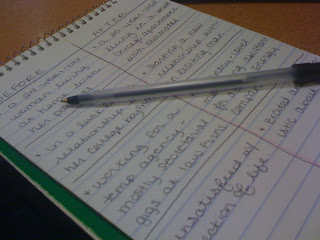 Do you ever find yourself stuck in your book not knowing where to take your story?

A good way to resolve that is by thinking about where your characters started, where you want them to be at the end of the book and how you should get them the there.

An exercise I've used, thanks to the advice of another author, is to create a T-chart for the main characters, like the one pictured here. In the first column, list descriptions about where your character is in his or her life at the beginning of the story. In the second column, write where he or she is at the end of it. I typically match them up by topic.

Let's try an example for a character called Liza.


Before: She is a 24-year-old woman living at home with her parents.
After: She is a 25-year-old woman who share a small apartment in Chicago with roommates.
Plot development: Liza reconnects with two friends from high school, and together they move from the suburbs and into a tiny apartment in Wrigleyville.

Before: She is in a lackluster relationship with her college boyfriend.
After: She is starting a new relationship with an exciting man.
Plot development: Tired of his apathetic attitude toward their relationship, Liza dumps her college boyfriend. She celebrates with her friends by going to a Cubs game. There, she meets a man when they fought over who is the owner of a foul ball that landed between them. Throughout the book they try to settle this dispute and end up deciding to share custody and each other's company by dating.

Before: Liza works for a temp agency doing filling mostly secretarial gigs at a law firm.
After: She has an entry-level marketing assistant job for a green energy company.
Plot development: Liza sends out 100 resumes to 100 companies and lands interviews at five companies. She is a finalist at two and wins the job with the green energy firm by giving a dynamic mock presentation and press campaign cleverly using social media.

This is a great resource for someone like me, because I typically know where my characters are before and after the book. It helps me focus in on the key points of their life that will be affected during the story, and I can determine the events that will happen in between.

It also helps you better know your characters.

Try it and see if it helps you.
Posted by Laura Chapman