the beloved daughter and the old friend next door 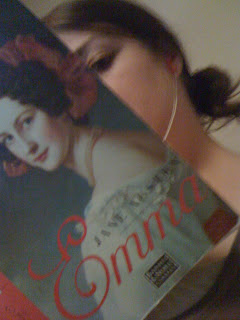 PBMG No. 7: Emma Woodhouse and Mr. Knightley from "Emma"

Jane Austen's Emma tells the story of the title character Emma Woodhouse and her attempts to meddle in the lives' of others much to the chagrin of her neighbor and long-time friend Mr. Knightley.

The scoop on Emma and Mr. Knightley

Emma is the youngest daughter of Mr. Woodhouse, a wealthy man in Highbury. Her older sister and governess are both married, leaving her to the care of her father and to her own boredom. She befriends Harriet Smith, a young woman in the town without known parentage, and is determined to find her a suitable husband, leading them both astray of decency at times in the process. Emma is determined to never marry, but devotes her time to marrying-off others.

Mr. Knightley is the older brother of John, Emma's brother-in-law, and he is also a neighbor and close friend to the family. Mr. Knightley has carried feelings for Emma before she returns them, and attempts to lead her down the good path.

Emma and Mr. Knightley met long before the book is set, and they have known each other her whole life.

The readers meet the duo together for the first time shortly after Emma returns from her governess' wedding to a local man. Mr. Knightley teases her, and it is lovely and Austen-like.

Near the end of the story, Emma realizes that she is in love with Mr. Knightley, after her good friend Harriet reveals that she too cares for him. Worried that she has lost all hope of winning him over, because of her previously careless and sometimes callous attitude, he and she meet upon his return from a visit to London to see his brother.

Though it starts awkwardly with both characters worrying about their hidden feelings for the other. Emma thinks he is in love with Harriet, and Mr. Knightley thinks she is in love with another man, Frank Churchill.

Soon, though, it goes quite beautifully. Both reveals their love for the other and they decide to marry.

What makes this scene so fantastic is the grand speech Mr. Knightley makes to Emma as he reveals his true feelings.

"I cannot make speeches, Emma:" — he soon resumed, and in a tone of such sincere, decided, intelligible tenderness as was tolerably convincing. "If I loved you less, I might be able to talk about it more. But you know what I am. You hear nothing but truth from me. I have blamed you, and lectured you, and you have borne it as no other woman in England would have born it. Bear with the truths I would tell you now, dearest Emma, as well as you have borne with them. The manner, perhaps, may have as little to recommend them. God knows, I have been a very indifferent lover. But you understand me. Yes, you see, you understand my feelings — and will return them if you can. At present, I ask only to hear, once to hear your voice" (371).

My heart flutters every time I read it.

They talk more about their feelings and he reveals that he rode through the rain to be with her upon the discover that Frank was married to another. She tells him she's never cared for Frank, and only has for him. Lovely.

She was his own Emma, by hand and word, when they returned into the house… (374).

This scene is followed quite nicely with another. Emma tells Mr. Knightley she is worried she cannot marry him, because she does not want to leave her father and her father would not want to leave his home. The true gentleman that he is, offers throw out tradition to move in with her family.

…So long as her father's happiness — in other words his life — required Hartfield to continue her home, it should be his likewise (387).

Emma is not quite your classic heroine. Jane Austen even said she wrote her being a character she was sure few people other than herself would like. Even the wonderful Mr. Knightley is often short and seemingly rude, which makes them both flawed. Flawed characters are some of the best.

I also find it incredibly delightful to think that you could find that the person you are best suited to spend your life with is someone who has already been part of it.

It darted through her with the speed of an arrow that Mr. Knightley must marry no one but herself!


Read the original post to learn more about this series. You can also read the previous entries by clicking "pbmg" under labels.

Check back Tuesday for No. 6.
Posted by Laura Chapman