the bookstore owner and mystery consultant 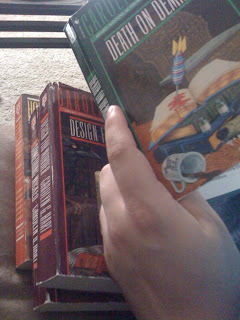 PBMG No. 8: Annie Laurence and Max Darling from the "Death on Demand" series

Carolyn G. Hart's Death on Demand series follows the misadventures of Annie and Max Darling as they solve murders in and around their new hometown of Broward's Rock Island, South Carolina. Surrounded by a cast of quirky and lovable (or obnoxious, depending on the circumstances) supporting characters, Annie and Max always seem to find themselves in the thick of it when crime strikes, and they must work together to find the guilty party.

The scoop on Annie and Max

Annie Laurence is a hard-working former aspiring actress who relocated to South Carolina to run the mystery book store she inherited from her beloved uncle.

Max Darling is an intelligent but idle man who comes from East Coast old money. In book one, Death on Demand, Max follows Annie to South Carolina to rekindle their relationship, after she previously ended it.

The two have seemingly little in common. Hart sums it up perfectly on pages 6 and 7 of the first book in the series:

She'd grown up in a shabby frame house in a Texas prairie town.

Max had lived in lots of houses: a white stone mansion high above a Connecticut river, a rambling, weathered summer home with its own tennis court on Long Island, a penthouse high above Fifth Avenue, a medieval castle near a Scottish loch.

She'd scrimped through school on a drama scholarship.

She liked life to be foursquare, aboveboard, and predictable.

He delighted in ambiguities, disdained certainties, and loved above anything to puncture pretensions.

Yet amongst there long-list of differences, these two take a second shot at love and come out winners, fortunately enough for us readers.

Before the series begins, Annie and Max met in New York City when she was trying to start an acting career. The two date for a while until, displeased with Max's lack of ambition or drive, Annie moves on to start a new life.

Unwilling to give up their relationship and undeterred by the fact that she moved hundreds of miles away, Max turns up in South Carolina after tracking her down using his cunning skills.

Max sets up an office as a detective agency as a consultant, and though she initially brushes off his advances, the two ultimately renew their feelings and become a couple.

I have only read the first four books in the series, but so far each one has had a scene or two that made me adore Annie and Max.

In book one, I love the easy conversation and banter the two carry early on when they are reunited.

In Design for Murder, Max unsuccessfully tries to get Annie to agree to set the date and plans for their wedding, and finally succeeds in winning her over by giving her a one-of-a-kind gift (a letter written by Agatha Christie to her husband while she wrote one of Annie's favorite books).

Not only do they school the local law enforcement on solving crimes, but Annie and Max are a lot of fun.

For example, in book No. 2, the duo shows up to a mystery-themed costume party ball dressed as Nancy Drew and Joe Hardy. Completely adorable moments that make you smile and melt your heart.

In book three, Max and Annie star in a community theater production of "Arsenic and Old Lace," and in book four, they decide to spend their honeymoon taking a mystery tour of Europe.

They also have ongoing, good-natured banter and teasing about Annie's love of fatty, high-calorie foods (like drive-thru tacos, chili dogs and hamburgers) and Max's lack of real, meaningful employment (he owns and runs a consultation business, because he doesn't feel like taking the South Carolina bar exam or completing two-year training to become a licensed private investigator). My mother assures me this continues throughout the series.

The world is over-run with mystery novels, not that this is a bad thing, but what sets the best apart from the rest are the ones with characters that are interesting and who the readers want to follow.

They are genuinely fun and likable people to read about. I look forward to reading more of the series simply, because Annie and Max Darling put on a good show.

"Love, I've known you when you were up and when you were down. I've made love to you in the moonlight, danced with you until dawn, witnessed table piggery unbounded, admired your intellect, your serve and your verve..."
- Max Darling (Design for Murder, page 301)

Read the original post to learn more about this series.

Check back Thursday for No. 7.
Posted by Laura Chapman