the governess and the master of the manor 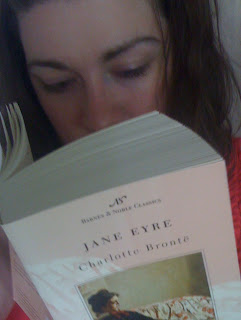 Jane Eyre is a faux autobiography about an orphaned girl named Jane who grows into adulthood and finds happiness as a wife and mother.


The scoop on Jane and Mr. Rochester

Jane's early life is filled with tragedy. Both of her parents die when she is young, and she is sent to live with family who mistreat her, before going to a school where she again faces hardships. She eventually reaches adulthood and takes a job as a governess for a young girl named Adèle, where she ultimately meets Edward Rochester.

Mr. Rochester is a Byronic-hero, who once lived a libertine lifestyle and is guardian to Adele, who may or may not be his daughter. He also attempts to commit bigotry by marrying Jane while he is still wed to a mentally unstable wife, who he keeps hidden away from the world. Knowing they cannot marry, Mr. Rochester instead asks Jane to run away with him to France to live as husband and wife, though not legally.

Still devastated by this news, Jane leaves his home to find a new place in the world, unwilling to sacrifice her morals and beliefs to be with the man she loves. More action happens, and eventually she reconnects with Mr. Rochester. He atones for his sins, and they all live happily ever after.

Jane and Mr. Rochester meet after she is already instilled at his home as a governess. While riding through a field one morning, Mr. Rochester's horse falls and he is injured. Jane offers her support to help him home.

She is intrigued by his dark, brooding ways. He is likewise interested in her caring, energetic personality. The two soon fall in love.

One year later, Jane returns to Mr. Rochester after learning about the recent tragedy in his life. His wife set his house on fire and committed suicide, and during the fire he lost one hand and his vision while rescuing people from inside the home.

The day after their reunion, the two take a walk together, where Jane serves as Mr. Rochester's guide not only by leading him around the grounds, but by being his eyes and describing the scenes around them. The two eventually spill all of their history, reaffirm their feelings for one another and decide they should marry as soon as possible.


Why I love them

In many ways ahead of her time, Jane is an independent woman who eventually learns to balance her practicalities and morals with matters of the heart. Though at times overly dramatic, her story is a good one. She's a solid narrator and one you hope finds happiness.

As for Mr. Rochester — he's the original bad boy. He has flaws, many of them, and a past filled with debauchery and selfishness. He learns to change his ways and become a better man, though, because of his love for Jane.

Who doesn't love a reformed bad boy? We still see this character in modern stories, and I love it. It may not really happen in life, but it sure is fun to read about.

"Every atom of your flesh is as dear to me as my own. In pain and sickness it would still be dear."
(page 350)

"... I cannot be so blessed after all my misery. It is a dream; such dreams as I have had at night when I had clasped her once more to my heart, as I do now; and kissed her, as thus — and felt that she loved me, and trusted she would not leave me."
(page 505)


I have now been married ten years. I know what it is to live entirely for and with what I love best on earth. I hold myself supremely blest—blest beyond what language can express; because I am my husband’s life as fully as he is mine. No woman was ever nearer to her mate than I am: ever more absolutely bone of his bone, and flesh of his flesh. I know no weariness of my Edward’s society: he knows none of mine, any more than we each do of the pulsation of the heart that beats in our separate bosoms; consequently, we are ever together. To be together is for us to be at once as free as in solitude, as gay as in company. We talk, I believe, all day long: to talk to each other is but a more animated and an audible thinking. All my confidence is bestowed on him, all his confidence is devoted to me; we are precisely suited in character—perfect concord is the result.

Thank you for reading.  Check out the original Project Boy Meets Girl post to learn more about this series.

Check back Thursday for No. 5.
Posted by Laura Chapman