the officer and a lady 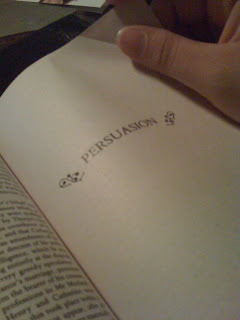 PBMG No. 5: Anne Elliot and Captain Frederick Wentworth in "Persuasion"

Jane Austen's Persuasion, published after her death, tells the story of a man and a woman who meet years after a failed relationship, and the obstacles and trials they must overcome to once again find each other's heart.

The scoop on Anne and Capt. Wentworth

Anne is the daughter of a British nobleman who falls from grace after loosing his money from irresponsible spending. Capt. Wentworth comes from a less noble family background, and is initially seen as an undesirable match for Anne. After becoming engaged early in life, Anne breaks off their relationship at the advice of her families and friends. They meet years later after Capt. Wentworth has made his fortune on his own terms.

Though their initial meeting seems to carry little emotion (at least on the good Captain's side), it is ultimately revealed that he still loves her and has measured every woman he's ever known to the one that got away.

Anne and Capt. Wentworth meet in their youth before the book begins. The fall madly in love after a few months of meeting, but are torn apart by their backgrounds.

In the book, they meet eight years after the fact. Neither has married. Anne seems to have no interest in the institution, and has in fact turned down a man who went on to marry one of her sisters, and the Captain is now in need of a wife (as all prosperous men of the time were), but hasn't found her.

Anne still feels for Capt. Wentworth, but he is determined to move on from the time she turned him away. He has more prospects now that he has made his fortune, and he considers marry for practicality rather than for love as he once wished.

They meet first as seemingly indifferent acquaintances, but eventually come together as friends to overcome adversity.

Months after overcoming the aforementioned adversity — an accident which left a mutual friend in severe illness — Anne and Capt. Wentworth meet again while visiting friends in Bath.

In one fateful instance, the Captain overhears Anne tell a friend that she believes men forget their feelings for women sooner than the opposite sex.

"We certainly do not forget you, so soon as you forget us. It is, perhaps, our fate rather than our merit."

It is at this moment Capt. Wentworth realizes Anne still cares for him, and he writes her a letter to say that his love for her has never gone away and he wishes for them to be together.

"I have loved none but you. Unjust I may have been, weak and resentful I have been, but never inconstant."

Soon after reading the letter, the two meet in a busy street and share a private moment where they renew their feelings. Neither has forgotten the other and neither wants to be with anyone but each other.

During this scene, we learn about Capt. Wentworth's heartbreak years earlier and his determination to forget Anne. Likewise, she reveals that she has never forgotten him and could never find another match like him. After little deliberation, they decide they will marry, and since their circumstances and ages have changed, their marriage is viewed favorably like everyone.

Have you ever been in love and given up on it for one reason or another? Yeah, so have I.

I am a total sucker for the story line of "the one who got away." In most cases, moving on to someone else turns out for the best, or it matters less after time passes, isn't it still nice when you see a case where love still concurs all?

Families and wars come between Anne and Capt. Wentworth — much better excuses than I've ever used — but after eight years apart, these two not only love each other as much as they did before, but their feelings are stronger.

And unlike Austen's previous stories, the heroine of this story is not a young 18- or 21-year-old, but a women in her late 20s (quite old to be a spinster for the time), and past her "prime." It's nice to know she can still find happiness in a good man. I know I'm not old, but I am no longer a young woman, and it is nice to see a couple who have gained more maturity and wisdom find love in a place they never thought to look again.

I find it terribly romantic to think that even after everything these two went through, both of them kept their love alive and were able to rekindle it. In most cases, only one person might carry on a torch for another (not necessarily this long), and nothing ever comes of it. You always wonder what could have been, and in this case you see where it works out.

I also like the idea of seeing two people who once had romantic feelings based in childhood develop into adulthood and have their love grow into something more realistic and strong. Had Anne and Frederick married years before, neither would have gained the experience and emotions that come from growing up, and who knows if they would have been able to so successfully combat the life obstacles that are bound to come.

I wouldn't be surprised if I someday write books where people who had a past come together years later. It's a fantastic story line no matter how you look at it.

"We certainly do not forget you, so soon as you forget us. It is, perhaps, our fate rather than our merit."

"You pierce my soul. I am half agony, half hope. Tell me not that I am too late, that such precious feelings are gone forever."

"I have loved none but you. Unjust I may have been, weak and resentful I have been, but never inconstant. You alone have brought me to Bath. For you alone I think and plan."

There they exchanged again those feelings and those promises which had once before seemed to secure every thing... There they returned again into the past, more exquisitely happy, perhaps, in their reunion, than when it had first been projected; more tender, more tried, more fixed in a knowledge of each other's character, truth, and attachment; more equal to act, more justified in acting.

Read the original post to learn more about this series. You can also click on "pbmg" under labels to read couples 6-10.

Check back Tuesday for No. 4.
Posted by Laura Chapman