the police chief's daughter and the bloodsucker 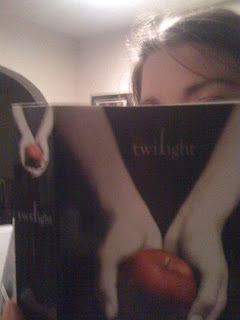 PBMG No. 9: Bella Swan and Edward Cullen from the "Twilight" series

My name is Laura, and I'm a Twi-hard. I tried to fight it early on, but shortly after Breaking Dawn was released something happened to me. I rented the movie "Twilight," and I decided I should read the books.

I was hooked. I slammed all four books in about one week. While I still have problems with the books, I couldn't get enough of the human-vampire love. I still can't explain it, but there is something about that forbidden love that is so hot.

I imagine most people have a basic idea of the plot, but I'll sum it up for those who don't.

Girl meets boy. Boy turns out to be a vampire. Girl falls in love with vampire. Vampire leaves girl. Girl meets werewolf. Vampire returns. Girl and vampire have angsty relationship until girl marries vampire, gets pregnant by vampire, becomes a vampire herself and lives an immortal life with her immortal family. And many people, vampires and werewolves fight, struggle and die along the way.

The scoop on Bella and Edward

Bella Swan is a nothing-special teenage girl when she arrives in Forks, Wash., to live with her father, the local police chief. She meets Edward Cullen, a vampire who has been alive for more than 100 years.

If it wasn't enough to live in constant fear that your boyfriend might one day snap and suck your blood, Bella has to deal with a best friend who is a werewolf — and who loves her in a way she cannot fully return - and two separate vampire covens that at one point in time or another want her dead.

Bella and Edward meet in the first book where most 17-year-old kids meet - in school. Bella sits next to Edward in a science class and has an immediate effect on him. Though he tries to avoid her, because her scent is too tempting to him, Edward eventually gives in and begins a relationship with Bella.

One of my favorite moments happens in Twilight, when Edward rescues Bella from the hoodlums in Port Angeles and takes her to an Italian restaurant where he finally reveals more of himself to her. While discussing Bella's tendency to find herself in trouble (no, not pregnant, at least not in this book) and his heroic desire to protect her.

"Did you ever think that maybe my number was up the first time?" Bella teases him on page 174.

What can I say? I'm a sucker for one-liners. The way Edward delivers them in books one through three often gives me chills. I like that.

Probably my all-time favorite scene is in Eclipse. The night before the battle. When Bella stays with Edward for some alone time. He asks her to marry him. She asks him to sleep with her. Both valiantly resist (until the next book). A good time is had by all.

My favorite part about this scene is when Edward teases Bella about the fact that their relationship has a gender stereotype role reversal: he's pushing marriage and she's pushing sex.

"You make me feel like a villain in a melodrama - twirling my mustache while I try to steal some poor girls virtue," Bella says on page 453.

Scene Stolen From Readers by Author

(Like a good little Twi-hard, I couldn't resist making this jab.)

I know this is supposedly a young adult series (psh), but I would have liked a little more info about Bella and Edward shacking up in Breaking Dawn. I'm not saying Stephenie Meyer had to go full romance novel, but a little something more than kissing on the beach and waking up the next morning would have been greatly appreciated. I swear, I'm not a total pervert, I just don't like being led on to end up with nothing.

That's probably one of the things I'm most excited for about the upcoming movies. I doubt Hollywood will be as big of a tease.

No matter how hard I fight it, I still find the whole thing completely romantic.

These two crazy kids are a modern day Romeo and Juliet, except it takes them longer than three days to meet, fall in love and marry. And Edward doesn't kill Bella's cousin. Despite the little elements that frustrate me about these story lines, there is something wonderful to me in the idea that two people would love each other so much, they would be willing to put everything out on the line for it.

For me, there was never a Team Edward or Team Jacob debate. I read Edward's intro to the series, and I was like, "Team who?"

Keeping with the timelessness, Edward comes from another generation and speaks and acts with chivalry. Some might see it as overbearing, and I'm not saying I'd want it every day, but I certainly enjoy reading about it.

He's smart, handsome and sparkles in the sun. He also has an eclectic, unpretentious taste in music (which I dig), and he plays the piano (I'm a sucker for musicians).

Though I have issues with Bella, in general she makes an ideal audience surrogate, who asks the questions and finds the answers we will need to know to understand the series.

As a woman, she is easy to identify with. She is a girl who does not give her self much credit and feels insignificant compared to her friends and family. I've read reviews where people criticize this fact about her, but to me, it was what gave her other flaws redemption and makes her a sympathetic narrator.

What I mostly like about them is the fact that they're a modern fairytale. Unlike any of the other couples I'll include in this countdown, they are the only one that is unobtainable (hate to say it guys, but vampires aren't real). Sometimes it's nice to slip away into a fantasy.

"And how long have you been seventeen?"

His lips twitched as he stared at the road. "A while," he admitted at last.

Perhaps one of the most famous from the book/ movie series...

"And so the lion fell in love with the lamb...," he murmured. I looked away, hiding my eyes as I thrilled to the word.

"What a stupid lamb," I sighed.

"What a sick, masochistic lion."

"What I want and need is to be with you, and I know I'll never be strong enough to leave again."
(New Moon, page 513)

"I promise to love you forever - every single day of forever. Will you marry me?"
(Eclipse, page 461)

I'm sure there are many others, but these books are massive, and I need to put the bulk of my efforts into being a Harry Potter fan this week.

Read the original post to learn more about this series.

Check back Tuesday for No. 8.
Posted by Laura Chapman