In The Writer's Little Helper, James V. Smith Jr. says it is possible to plan a book by focusing on the ten key scenes in a book that progress the book's plot.

Smith uses this chart (as pictured in the book) to accomplish this: 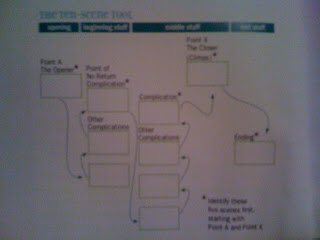 Here is how it works:
• Start by planning Point A and Point X. You can better write a book knowing where it will begin and how it will end.
• Next, plot out the Point of No Return, final Complication and Ending.
• Fill in the remaining spots with complications that will carry the plot to these key points.

By using the Ten-Scene Tool chart, NAME believes writers can direct their story without becoming bogged down by taking too much time or focusing on too many details.

For my monthly writing group, I developed this example to illustrate how this tool can work using a well-known book.

Bella moves to Forks. Bella leaves Phoenix, Ariz., where she lived with her mother and step-father, to move to Forks, Wash., to live with her father. It is the town where she was born, but has not visited in years.

Bella meets Edward. Bella begins school at Forks. There, she observes the Cullen family and meets Edward. He acts rudely toward her, and it leaves Bella wondering what has gone wrong. She is unable to receive an answer, because Edward does not attend school the rest of the week.

Edward saves Bella from being crushed by a car in the school parking lot. While standing outside the school, Bella narrowly escapes serious injury from a vehicle skidding on ice. Edward saves Bella by moving her to safety and stopping the vehicle from hitting her. Bella seems to be the only person who notices how far away Edward was before the incident, and how much speed and strength he exerted to save her life. None of his answers satisfy Bella.

Bella learns Edward's true identity. Edward once again saves Bella's life while she is on a shopping excursion to Port Angeles. During dinner and the subsequent drive home, Edward and Bella exchange a great deal of information. Bella learns Edward can read minds.. Bella also tells Edward she has researched him and believes he is a vampire, which he confirms. She decides she is cool with that. "About three things I was absolutely positive. First, Edward was a vampire. Second, there was a part of him — and I didn't know how potent that part might be — that thirsted for my blood. And third, I was unconditionally and irrevocably in love with him."

Edward fills Bella in on the details of his existence. Edward takes Bella to the mountain-top to reveal more about his life as a vampire. This includes what happens to his skin ("… literally sparkled, like thousands of tiny diamonds…"); his thirst for her blood ("'… you are exactly my brad of heroin.'") and about how he came into his existence as a vampire, and the stories about the rest of his family.

Bella officially meets the Cullens. Bella visits the Cullen home with Edward. She learns more about him, his family and the seriousness that could result from their relationship (i.e. her death by vampire). She learns more about Dr. Cullen's history as a vampire. The readers are also introduced to the Volturie for the first time (They are not called by this name, yet.).

Bella becomes the target of a vampire tracker. While playing baseball with Edward's family, a coven of nomadic vampires come upon Bella and the Cullens. James, a tracker, detects Bella, a human, and decides to hunt her, because he knows the Cullens will put up a good fight. The Cullens decide Bella must leave Forks while they track down James.

The tracker makes an offer Bella cannot refuse. James contacts Bella and tells her he has captured her mother. In exchange for her mother's life, Bella must ditch her protection and surrender. Bella decides to do this, and throws off the Cullens at the airport so she can go meet James and save her mother's life.

James bites Bella. Cullens kill James. Edward saves Bella's life. Bella meets James at the ballet studio. She learns that she was tricked, and her mother is safe. James attacks Bella, injures her and also bites her. Edward and his family arrive to save her. Edward must suck the venom out of her body, while his siblings destroy James.

Bella recovers and goes to prom with her man. Bella recovers in the hospital and has a serious talk with Edward. He fills her in on what she missed while she was out. She tells him she wants to become a vampire and he declines. Bella recovers, and Edward takes her to the prom, while she also receives a warning from the Black family.

While I do not exclusively use the Ten-Scene Tool as a planning device, I have found it a beneficial resource for creating a greater quality plot. With it I ensure a story moves in the correct direction and has enough memorable scenes in it to carry audience interest.

Thank you for reading this series. I hope you found these resources helpful for planning your own stories. I am sure there are more ways out there to to do it, and I would love to hear back from you on what you do.

By the way, I recommend Smith's book to anyone looking for a good resource on how to write a book. I've quoted him before, and I'll probably do it again, because it's just that good. You can order it here.
Posted by Laura Chapman