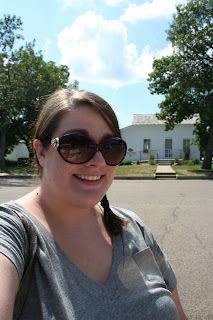 Some people dream of visiting the Great Pyramids or Eiffel Tower. I dreamed of visiting DeSmet, S.D.

I devoured Laura Ingalls Wilder's Little House series as a young girl, and still consider These Happy Golden Years my all-time favorite book. I wanted to see all of the places where my beloved stories took place.

Two weeks ago, I stopped in Pepin, Wis., to view the plot of land where the author was born in a log cabin in 1867. I enjoyed the spot, but it only made me want to see the place where five of the books were set, and most of LIW's family spent the rest of their lives.

Last week, I did it. I had to cover a work event Saturday in Dilworth, Minn., and in hopes of avoiding the Missouri River flooding to the east, I took the back roads (US-81) through Yankton, S.D.

De Smet was so close to my path, it seemed rude not to stop and say hello.

Throughout the drive I was brimming with excitement. I would see where the Ingalls family staked their homestead. I would walk through the school the girls attended. I would be where Laura met and married the hunky Almanzo, who as depicted in the books is my standard for a perfect man.

I was like an Elvis fan on her first trip to Graceland.

I rolled into DeSmet, greeted by signs that proclaimed this was in fact the Little Town on the Prairie, and directions to the LIW Memorial Society. I pulled up to the grounds and purchased my ticket for a tour, once again delighted to see about a dozen people wandering the grounds.

Growing up, I was the only one of my friends who read and adored the series, and I was glad to see that other people cared. As a writer, I was also glad to see people stop, because I assume that means they have read the books, and I constantly worry people no longer read.

I read an interview with Wendy McClure, author of The Wilder Life: My Adventures in the Lost World of Little House on the Prairie — which I have not yet read, but am eager to do — put it well.

"As a kid, my relationship to Laura and the books was so solitary—I didn’t really know anyone else who loved the books. So when I started to meet and talk to others about the book, it took a little getting used to at first, because everyone’s fandom is different (some people really love the TV show, others consider it sacrilege); but I’ve since found that one of the best things about writing this book is being able to take part in this shared passion."

My relationship was always personal, and it's only now in my 20s that I was seeing other people who loved these stories like I did. It's hard to explain to a person who doesn't feel the way I do about LIW. In one regard it's refreshing, but if I'm being honest, it makes me jealous. I always figured I was the biggest LIW fan in the world, and the more I get out there, the more I see that just isn't so.

We took the tour, and I took as many mental pictures as I could of the Surveyor's House where the Ingalls family once did and the school house Laura and Carrie attended. I walked through the rooms in the house Pa Ingalls built for his family some time during The First Four Years, and a sense of melancholy hit me. I thought it might be disappointment, because I had built this up in my mind for so many years, but shook it off and decided to see some other sites in hopes it would cheer me up.

I saw the Ingalls and Wilder homesteads. The Ingalls land has been turned into a tourist attraction, which a friend described as LIW Disney World, complete with wagon rides and replicas of structures mentioned in the books.

It was a neat enough spot, but the Wilder land located north of town was the one that had a more profound affect on me. The land is empty. If not for the historical marker or the slight dip on a hill where a building once stood, you might miss it.

I stared across the prairie that was not much different from the scenery in my native Nebraska, and I mentally put myself in my favorite characters' shoes as well as I could. For miles you could see nothing but fields. The only difference now from then was that every so often a vehicle would pass by on the highway. It's hard, if not impossible, for a person like me, who has always lived in a city, to know what it must have been like to spend most of your life so far removed from others.

This had stopped being just a sightseeing trip. I've walked the streets of New Orleans' French Quarter, prayed in Westminster Abbey and sat in on a congressional hearing. But none of those had the emotional impact I felt here. 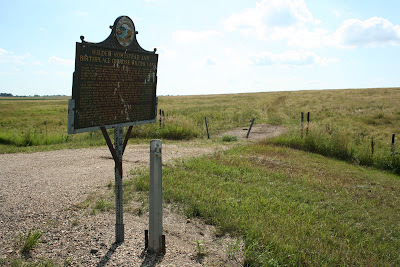 I broke down at the DeSmet cemetery. Pa, Ma, Mary, Carrie and Laura and Almanzo's infant son are all laid to rest there. I only spent a few minutes there, but I cried. I felt ridiculous — I mean, I've always known these people had lived and died years before I was born. Why did seeing their graves, former homes and land make me feel this way?

"It made them seem real," a friend told me as we met for coffee yesterday to swap stories about our separate experiences in DeSmet.

She was right. I always knew the characters were real people. I often felt they were my friends and that I knew them. But on that day, as I saw the physical proof of their existence, they were real. I walked where they walked and everything changed.

When faced with the facts, everything I've imagined for years looks a little different. It's difficult to romanticize reality.

Despite my bleak description of my trip, I had a nice time and am glad I went. I'm just dealing with the aftermath and what it really all meant to me.

I'm still thinking — and feeling — about my trip to DeSmet. I don't feel as sad as I did throughout the weekend, and I'm sure that given time I will be able to better reconcile the fiction with the facts. 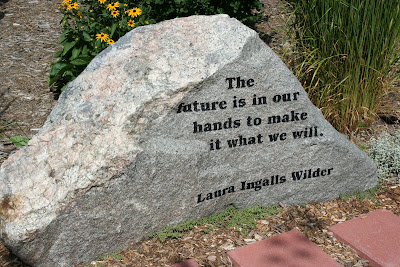