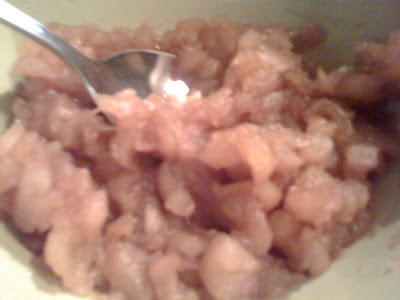 When I came up with the idea for Reading in the Kitchen, I was excited. I love reading. I love cooking. Put them together and you have fun.

Once past the initial thrill, I panicked. A little. How was I going to come up with enough food references in books to carry this series on beyond a few obvious choices? That's when I turned to family, friends and Twitter. This was a good idea, because without it, I would not have gotten the idea for today's recipe.

One of my Twitter friends reminded me of a great scene in Emily Brontë's Wuthering Heights. In it Heathcliff, the Byronic hero (*yes* love getting to use that description) gets angry with another character. And dumps hot applesauce over the poor young gentleman's head.


'He shall have his share of my hand, if I catch him downstairs till dark,' cried Hindley. 'Begone, you vagabond! What! you are attempting the coxcomb, are you? Wait till I get hold of those elegant locks - see if I won't pull them a bit longer!'

'They are long enough already,' observed Master Linton, peeping from the doorway; 'I wonder they don't make his head ache. It's like a colt's mane over his eyes!'

He ventured this remark without any intention to insult; but Heathcliff's violent nature was not prepared to endure the appearance of impertinence from one whom he seemed to hate, even then, as a rival. He seized a tureen of hot apple sauce (the first thing that came under his gripe) and dashed it full against the speaker's face and neck; who instantly commenced a lament that brought Isabella and Catherine hurrying to the place. Mr. Earnshaw snatched up the culprit directly and conveyed him to his chamber; where, doubtless, he administered a rough remedy to cool the fit of passion, for he appeared red and breathless. I got the dishcloth, and rather spitefully scrubbed Edgar's nose and mouth, affirming it served him right for meddling. His sister began weeping to go home, and Cathy stood by confounded, blushing for all. (Chapter Seven)

Oh, what a fun scene. I love applesauce, but have never had it homemade, except in a restaurant, and who knows if they're serious. (UPDATE: Mom called me after reading this to tell me that both she and my grandma made it for me when I was little. So, there you go.) It also happened that I had a day trip planned to visit Nebraska City for apple picking.

It's fall in Nebraska, and if you are not familiar with the area, then you don't know that Nebraska City, located about 45 minutes east of Lincoln near the Missouri River and Iowa border, is a prime location for apple growing. The apple picking and general merriment draws us city folk out of Lincoln and Omaha to visit every fall.

So with that plan in action, I impatiently waited for harvest to begin so I could tackle this recipe.

Truth be told, picking the apples was the hardest part of this recipe. Homemade applesauce is the easiest dish I have made to date in this series. It was quick, fun and I would definitely consider this a one you could make with children and as part of a meal with little planning. 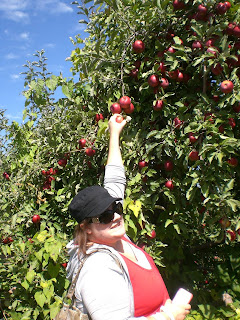 Saturday, my sister and I made it to the orchard and spent a lovely afternoon. We went on a walking tour, climbed a tree house, went through a corn maze and tasted apple wine. And of course, we picked a peck of apples. That's what the bag they gave me to put them in said, at least: a peck of apples.

It turns out, a peck is a lot. You can expect a few more book-related apple recipes in the coming weeks. As I told my sister, we have to do something awesome with the apples to fulfill their destiny.

But back to the applesauce. I didn't make it right away when I got home. There was a football game that night, and I had a date with a pitcher of beer and a pile of onion rings. So, I made it for dinner Sunday night. My Broomie and I were home all day, and I figured this would be a good chance to get his input on one of these dishes. (He's tried a few of the others, but this time it is on the record.)

Like I said. this recipe was easy. First, I peeled and diced 4 cups of apples according to recipes I found online to serve 2 people. (I used three large apples and two small ones to ensure we had enough. I placed them in a saucepan on the stove on medium low heat. Then, I added 4 tablespoons of brown sugar, 1 teaspoon of vanilla extract and 1/4 teaspoon cinnamon. 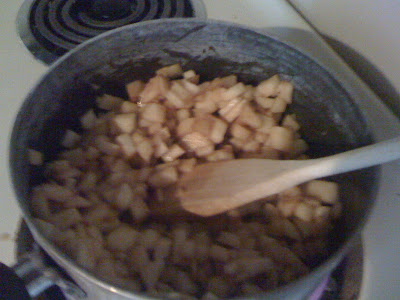 I left it to simmer on the stove for about 35 minutes.

After the apple pieces were cooked through I mashed them like I would potatoes. Only, instead of creaming those apples to bits to make them completely smooth, I left it chunky. That's how I always imagined the applesauce in Wuthering Heights, and I wanted this to feel authentic.

I removed the pot from the stove and split the apple sauce into two bowls. My Broomie walked into the kitchen as I scraped the last drop of apple out of the pot. 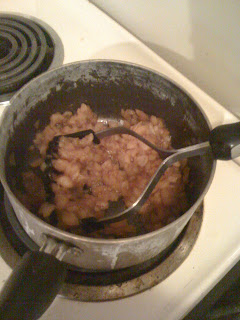 I shook my head and shoved the bowl at him.

"It's supposed to be served hot. It was hot in the book when Heathcliff dumps it on that guy."

Not that it would have mattered to the Broomie. I don't think Wuthering Heights has ever been in his reading list. But, he humored me and took a bite.

"It's good," he said.  Then he took another bite and set the bowl down. "I burnt my tongue."

In hindsight, I should have expected one of us to end up hurt. The apples were fresh off the stove. Poor Broomie. Poor Linton. If hot apples could burn your tongue, imagine how awful it would feel to take a shower in it.

I felt a little guilty for the unintended pain I caused. I kept quiet while I ate and enjoyed my own bowl of the applesauce before prompting the Broomie for his official review.

"So... what do you think about the applesauce?" I asked.

He took another bite. "It has earthy undertones," he said. He grinned at me then stuck his nose into his bowl to inhale deeply. "And lots spice."

I wish I would have videoed him doing this. I can't do justice explaining it. You'll have to take my word that it was funny. At the time, though, I was so bemused by what he was doing I sat and stared.

While I doubt the sincerity of his review, Broomie must have liked it. He ate all of it even after I stopped pestering him. For my part, I enjoyed this chunkier, heated version of applesauce a lot. You could taste the spices in it more. It tasted more like an autumn treat than a children's (or my) lunchbox item.

I hope you'll take advantage of this fabulous fall season and make your own applesauce. Curl up with a bowl of it and laugh while you read about what Heathcliff did with his share of it. It'll change the way you eat it.