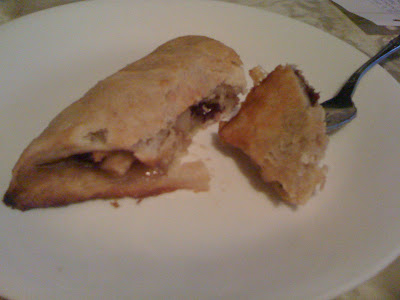 I had some leftovers after making my three-course pear meal, which I realized when I came home from work Wednesday night. Feeling creative, but mostly bored, I decided to see what I could do with some of the supplies in my fridge and pantry.

I figured if it turned out awful I had nothing to lose. Most of it would have gone bad otherwise, and I was just giving it a chance of fulfilling its destiny as a delicious dish. 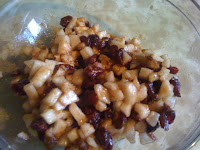 I skinned and diced three pears and mixed it with 1/2 cup of dried cranberries, 1/2 cup of brown sugar, 1/2 teaspoon of cinnamon and 1/2 teaspoon pumpkin pie spice (throw in nutmeg and cloves if you don't have this). On a whim, I recalled the honey I had to purchase for the salad, and I added about 6 tablespoons of honey. 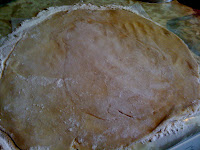 I thinly rolled the remaining pie crust from last week's Green Pumpkin Pie. Then, I cut it into nine squares, trying to be as even as possible with all of them. I put the filling in the center of the square before it in half. However, the mixture became quite liquid from the pear juices, which made it difficult to seal the triangles. 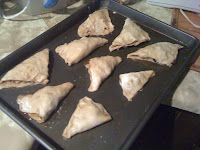 I baked it at 400 degrees for 10 minutes. I then reduced the heat to 350 degrees and cooked it for an additional 10 minutes.

It was really good, actually, and not quite like anything I've had before. The honey and brown sugar enhanced the natural sugars from the pear.  I had trouble sealing the triangles, which means they didn't appear pretty, but tasted delicious.

But now I have a quandary. What should I call it? Maybe Pear Pastry Wedges or something like that? Any clever suggestions from any of you?
Posted by Laura Chapman