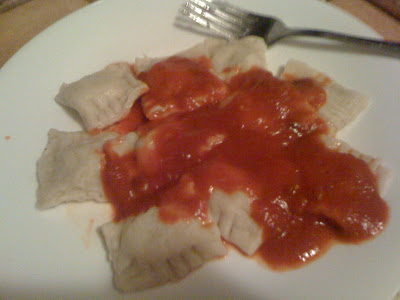 Anyone else see the new Breaking Dawn Part 1 trailer? Did anyone else freak out and have a momentary baby-related panic attack thinking about what is to come?

As previously confessed, I'm a little bit of a Twi-hard. Now, I'm not saying I devote my every waking hour to the series, but I do enjoy them. And, I will likely see Breaking Dawn Part 1 the first weekend it's out — even if I worry it may cause permanent psychological damage. (For those of you who have read the book, you know why. Those who haven't, well, all I will say is I think this movie may do more to prevent teenage pregnancy then anything else has.)

In an attempt to block the future horror from my mind, I decided to think about a simpler time. A time when Bella Swan's main concern was trying to figure out if Edward Cullen was a vampire. Back in Twilight, Edward rescues Bella from a pack of scamps in Port Angeles. He takes her to dinner at an Italian restaurant where he can reveal some of his dark secrets.

She off-handedly orders mushroom ravioli… and then mentions the dish a half-dozen times throughout the rest of the scene. In between revelations and secrets, Bella reminds us that she is digging into a delicious dish. That combined with the breadsticks she's packing away and the apple on the cover of the book is enough to make me hungry every time I read it.

As a recent pescetarian convert the mushroom ravioli sounded delicious.

Let's pause a moment for me to explain pescetarianism. No, it is not some new religious sect I've joined. Don't be embarrassed if that's where your mind went. You wouldn't be the first person to ask me what church I go to or who my pastor is after mentioning it. Pescetarians do not eat meat with the exception of fish. For the most part, I stick to a relaxed vegetarian diet, which includes animal byproducts, such as dairy and eggs. Once or twice a week I eat fish.

One of my broomies (* broomie = brother/ roomie — I live with both brothers, thus they're my broomies) became a vegetarian in August, and I went pescetarian at this time. I decided to try it for a month, and when the 31 days passed, I decided to keep going. I won't go into my reasons for doing it, but I enjoy it. It forces me to try more foods and to eat things I might have previously ignored.

Changing up my diet and trying new recipes actually contributed to me creating this series.

Now that I've explained that, let's get back to Twilight and mushroom ravioli. After deciding on this menu item, the first person I turned to for advice was my Mom, of course. She leant me a couple of cookbooks from her collection. With no personal experience of her own, she assured me I would be on my own to figure it out.

"Roll the pasta dough really thin," she said, "and follow the directions."

I'd like to think I follow directions, but in the kitchen it hasn't always been my strong suit.

The first time I attempted homemade cookies, I didn't pay enough attention to the directions and added baking powder instead of baking soda. That batch ended up in the trash. Another time, I tried macaroni and cheese from the box, and I ended up with hardly cooked noodles in a pool of cheesy water. 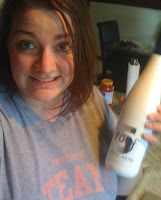 I went to the grocery store Tuesday night to pick up some fresh mushrooms, ricotta cheese and a few other supplies from my grocery list. Excited, but unable to fight the twinge of dread at failing, I made a quick stop to the wine aisle at my local grocery store. I had a hectic start to the work week and thought a glass of wine might do the trick. I figured worst case scenario, if the ravioli turned out like crap, at least I would have the wine to console me.

While debating between a Riesling and a Guwerstraminer, a white bottle caught my eye. "Fünf Sassy White," it said in classy letters. A former high school German student, I knew "fünf" meant five, which is apparently the time it is socially acceptable to get your drink on. It was also cheaper than either of the bottles. With a bottle that classy and a name that said sassy, I was sold.
http://funfwines.com/funf-sassy-white.html 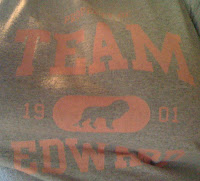 I returned home, put on my Twilight T-shirt (yes, I have a Team Edward T-shirt) and cracked open the bottle of Fünf. I sat down with one of the cookbooks. If I didn't want this to suck, I needed to research. As I sipped on the wine — which for a measly $6 was quite good and sassy — I read about how to make the dough in this handy cookbook. It only called for a few ingredients, and the trickiest part seemed like the point where I would actually have to slice and dice the dough into pretty look ravioli.

Feeling more confident, I poured another glass of wine and went to work making the filling. I read up on various mushroom recipes and decided to make a filling that sounded good to me. I finely diced 4 ounces of fresh portabello mushrooms (about half a pack of what you find in the store) and about 1/4 a good-sized yellow onion. I heated the stove to medium setting and added 1 tablespoon of olive oil into the skillet. I put the mushroom and onion in the skillet with one crushed garlic clove and some pepper. I cooked it for about 5 to 10 minutes, stirring frequently. 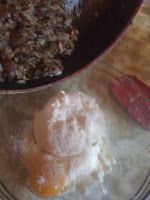 I removed the mushroom mixture from the stove and set it aside while I mixed 1/2 cup ricotta cheese (I used the half skim type) with 1/4 cup grated parmesan. You could probably use fresh parmesan, but I used the kind that comes in a canister, because that is what I had. I stirred the mushroom mix into the cheese and put the completed concoction in the fridge.

Now was time for the big show — making the dough. I topped off my wine glass and started mixing. Based on how much stuffing mix I had, I mixed 2 cups of flour and 2 teaspoons of salt in a large mixing bowl. In a small bowl, I whisked together two eggs with 2 tablespoons of cooking oil.

I created a well in the dry mixture, which is exactly what it sounds like, but I took a picture to help you out if you don't know. Then, I placed the wet concoction in the dry mix's well. Using a fork, I slowly added dry mix to the egg blend. As the mixture grew thicker and thicker, I added 1 tablespoon of cold water from the fridge at a time while still mixing. Total, I used about 5 tablespoons of water. 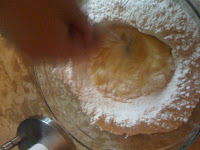 Once mostly mixed, I removed the dough from the bowl and kneaded it by hand for about 10 minutes. After the dough felt firm but slightly elastic, I covered it with the bowl I used to mix it and let it sit for another 10 minutes.

I returned to the dough and my wine and split the dough into two parts. I thinly rolled the first part like my mom suggested. I tried to keep it as rectangular-shaped as possible. Taking a butter knife, I sliced the dough into 2-inch by 4-inch parts. I then put teaspoon-sized dollops of filling on each part of dough. I folded the dough over to make it into a square. Using a fork, I crimped all four sides to seal it.

Once I was done with the first batch (which took about 30 minutes), I put them in a pot of boiling water to cook for about seven minutes. I worked on the second batch, which looked a lot sloppier and boiled them while the others cooled off. 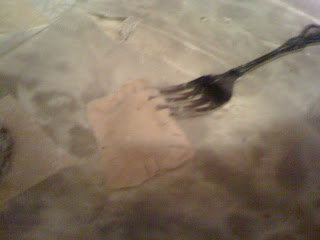 More than two hours after starting the process, I topped a plate of the mushroom raviolis with some tomato sauce from a jar. I know it might seem silly after I went to the effort of making homemade pasta, but I was exhausted. Plus, the label on the jar assured me it was "old world style" and had a serving of vegetables in every half cup. Who was I to argue with that marketing when he wine I was enjoying tasted as sassy as I imagined it would.

I took my first bite and . . . success. The ravioli was quite good and some of the best I've ever had, even with canned marinara sauce. I didn't have any guests around to back me up, but you'll have to trust me on this. Even the weird looking ones tasted great.

I'm sure they were good enough that even Bella Swan would mention them repeatedly in a book scene if she ate them herself.

While it was a fun process and the outcome was good, it was a lot of work. I was exhausted by the time I was done cooking, and I don't think it was just the wine. If I make ravioli again, I'll do it on a weekend and give myself more time to do it. I also might experiment with the dough and filling more to see what else I can come up with.

I was so tired, I packed up the bulk of the pasta and ate it for meals the next couple of days. I also delayed making my dessert until Wednesday night and lounged on the couch for the rest of the evening.

After heating up some leftover mushroom ravioli, which was just as good the next day, I decided to make baked apples, because I figured the outcome would look like the Twilight book cover. 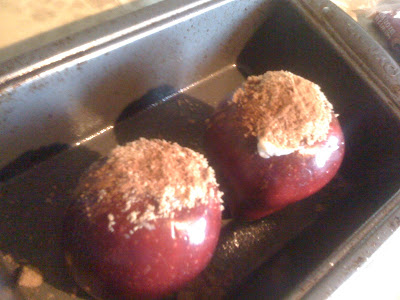 This was super easy. I removed the core of an apple from the top, leaving the base still intact. I placed 2 tablespoons of brown sugar, a pinch of cinnamon and 1 tablespoon of butter into the hollowed apple. For fun, I trickled some of that honey from last week's meal on top. I baked it in the oven for 20 minutes at 350 degrees. 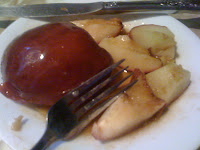 It tasted like fall. For pretty little effort, and few calories in the grand scheme, baked apples make a good dessert and are an excellent way to use apples if you have them in stock.

I hope you fellow Twi-hards and cooking enthusiasts enjoyed these recipes.


Check back next week to see what we'll read in the kitchen next. See more literary cooking adventures by clicking on the "Reading in the Kitchen" tab at the top of the page.
Posted by Laura Chapman