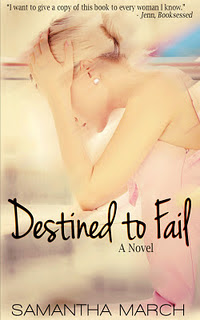 Determined to secure a bright future, Jasmine Jones must address the dark past she hoped to forget in Samantha March's debut novel "Destined to Fail."

Ambitious, friendly and stylish, JJ seemingly has it made. She has a close relationship with her mother and a crushable boyfriend, Nate. And now, she is headed to business college in Des Moines with Abby, her best friend. JJ quickly settles in, but all is not well. Abby ends up pregnant by her abusive boyfriend and drops out of college, which causes a major rift between the friends. Also, JJ is guarding details about her past from her boyfriend, new friends and even the reader.

But when JJ finds herself pregnant and her new friends face tough circumstances, she gradually opens up to face her history, which is filled with abuse, abandonment, addiction and more.

The number of hardships JJ endures would seem excessive if they were not believably written. Even though she is slow to fully explain everything, March foreshadows well enough that the reveals are not unnatural or wholly unexpected.

The novel unabashedly covers sensitive topics ranging from domestic abuse, abortion versus adoption, safe sex practices, and so on. The book handles the issues with sensitivity and precision, which makes it approachable. Through JJ's narrative, March raises awareness for important women's issues without being preachy or judgmental. By doing this, the book becomes a solid read for young adults, the audience who probably most needs this message.

JJ is a well-developed character and an ideal narrator for the story. Flawed and damaged, but hopeful and hard-working, she is relatable and admirable. I would have liked to see more development in other characters, such as her friends and sister. They seemed to have stories wanting told, but maybe they will have their chance in the future.

The hours spent reading JJ's story were worth the time, and I would look forward to reading March's future offerings.