Last week I traveled for my job to work on a special project. It was my first work trip in more than two months, and it took me to a part of the country I haven't explored much.

I shared a couple of posts throughout the week from the road. Now that I'm back, I wanted to share my favorite moments and highlights from my week.

Monday, Oct. 5: Lincoln, Neb., to Sterling, Colo., to Trinidad, Colo. (650 miles)
I left my office before 7 a.m., and made the drive across Nebraska into Colorado. With a lunch break in Sterling to visit a friend, I continued onward to Trinidad, Colo. The drive wasn't terribly exciting until the end, but I love driving toward mountains.

For my drive, I listened to an audio book. Thinking it was a straight chick-lit novel, I received quite the shock when I realized it was more romance. Which I didn't realize until the male protagonist had the female protagonist pushed up against a brick wall in a garage. Things escalated quickly from there. I reviewed the book yesterday, and while I quite enjoyed it, I sure was surprised at the time. 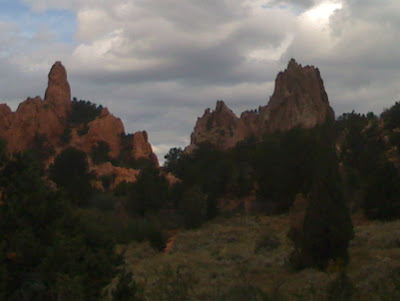 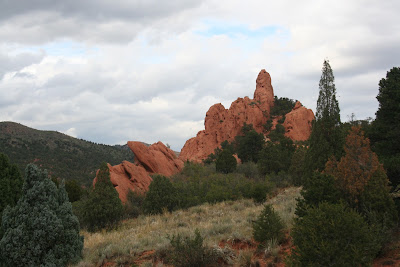 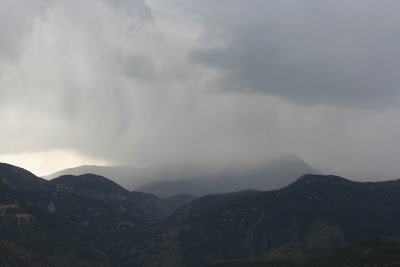 I visited Garden of the Gods and saw Pikes Peak on my way to Denver. The photos show the hour side trip was well worth the effort. It's at this moment I realize I could totally live in the Colorado mountains. At the very least, I'm going to write books set here. It's too beautiful not, too.

Wednesday, Oct. 7: Denver to Casper, Wyo. (290 miles)
On Wednesday, my friend/ co-worker and I started a travel scavenger hunt. We each submitted 10 items and the first person to check off all 20 clues would win.

I made a couple of short stops along the way. I visited the Oregon Trail wagon ruts in Guernsey, Wyo. The stop could have been anticlimactic — I had to backtrack because the main exit was closed and the location is about 20 minutes north of the interstate and it wasn't a lot to see. But, when I arrived at the park, I discovered that I had inadvertently crashed an elementary school field trip.

While I quietly tried to avoid the group, which was heavily in discussion, I overheard one of the best discussions ever.  One child asked the teacher what Oregon Trail travelers did for food when they became stuck in the winter. The teacher then awkwardly explained the Donner Party to the class. The students perked up and suddenly seemed to find the trail much more interesting with the knowledge that cannibalism some times took place.

It took all of my willpower not to laugh, but I couldn't. Not when that teacher was doing her best, and more than earning her paycheck for the year.

My highlight of the day was arriving in Casper, though. Not only did I check several items off my scavenger hunt list, but I also went to dinner with my nephew. He is 12 now and in middle school, and I was lucky to get to see him in between school breaks and holidays.

Thursday, Oct. 8: Casper to Cheyenne, Wyo., to Sterling (310 miles)
I checked more items off my list and listened to the bulk of Promises to Keep by Jane Green. Luckily, one of my Tweeps warned me it was a tear jerker. Otherwise, I would have been blindsided when I was suddenly hit with tears that lasted from the Wyoming-Colorado border all the way to Sterling.

I also had dinner with my friend and her family. Her 3-year-old daughter is such a hoot. She reminds me of the stories my mom tells me about what I was like at the same age. Of course the two of us are like peas in a pod.

It is so cool to witness the interaction between three generations of women in one family, which was what I saw during my dinner in Sterling. It makes me consider the relationships people have with their families and the importance it plays in a story. It certainly was important in the book I listened to my final days on the road. 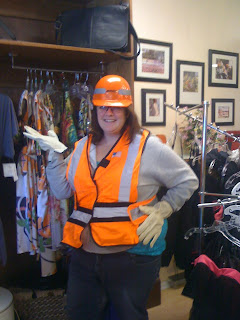 I finished up my work — or at least as much as I could get done on the road — and the bulk of my scavenger hunt and headed home. My final, and favorite clue, was having to take a picture of myself, dressed from head to toe in PPE — personal protective equipment, such as a hard hat, steel-toed boots, reflective vests and safety glasses — in a dress shop. Bless the shop owner, who took the picture and had a good laugh with me as she directed me in my pose.

There are stories behind almost every piece of this scavenger hunt — from the hunt itself to each of the parts. It also took a trip, which was interesting on its own, but made it more fun. It also gave me a greater link to one of my fellow travelers. We kept company throughout the whole trip, and we both were able to indulge our competitive streak.

Unfortunately, we both became stuck at 19 items, with neither of us finding the same clue: an angry person yelling or gesturing rudely. I couldn't have picked a better adversary in this hunt, and it was a lot of fun. It reminded me of how much I love adventure.

This week was chock-filled with story ideas and inspiration for me to use in my writing. Which is awesome. Every mile of the 2,184 miles I drove was worth it for the memories I built.

Thanks for joining me on my adventure with your blog comments and Twitter messages. It made me feel less alone knowing I had you there. I also encourage all of you to take every opportunity to look for new story ideas. It can happen while lost in your thoughts on a drive, having a conversation with a stranger or seeing something new. Stories are everywhere.
Posted by Laura Chapman