something delicious this way comes 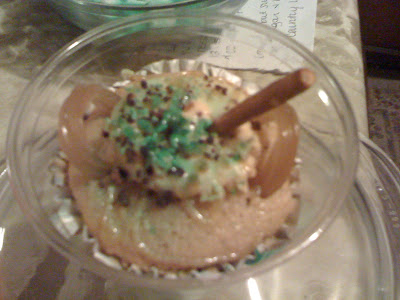 Halloween is days away, and Harry Potter always comes to mind this time of year. I know the books take place year-round, and October is no more important than any other, but all the talk of witches and costumes sends my mind to Hogwarts.

So with this in my head, I decided I wanted to make a delicious Harry Potter-themed treat to share with my family and friends this Halloween. My dish of choice: Cauldron Cakes.

I checked the interwebs to see what these cakes were and found mixed results. A lot of people make chocolate cupcakes decorated in different ways to look like cauldrons. But that's not quite how I imagined cauldron cakes to be. I figured they'd be more pumpkin-flavored or have spices. And of course, they'd have awesome decorations, but not so they overwhelmed the integrity of the cake.

I checked with two of my favorite local Potter fans and they shared my thoughts. Fortunately, I found a recipe on Food.com for Cauldron Cakes that were described as spice cakes. Perfect. With the recipe down I focused on the decorations. I went to a craft store to select toppings. I decided to make copper-cauldrons to match the color of the cake. I found copper tins, gold/ sparkly gel and coppery sprinkles. Then, I picked up some green food coloring spray as a fun surprise. I also bought stick pretzels to be the spoon for the cauldron.

The next day I made the cakes during my lunch break to give them sufficient time to cool off before decorating that evening. The recipe on Food.com suggested decorating with sprinkles or frosting, so I decided I would make a pumpkin cream cheese freeze frosting and use some treats to decorate it more. 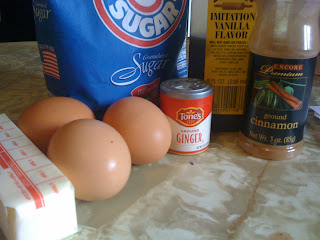 Here's what you will need to make the spice cakes:
2 cups flour
1.5 cups sugar
3.5 teaspoons baking powder
1 teaspoon salt
1/2 cup softened butter (I used a stick of unsalted)
1 cup milk (I used the soy in my fridge)
1 teaspoon vanilla extract
3 eggs
3/4 teaspoon cinnamon
1/8 teaspoon ginger (I had it in with my cooking not baking spices, but I guess they're all the same, or so Mom explained to me when I nervously texted her.)

I followed the Food.com directions and began by mixing the eggs, sugar, butter, cinnamon, ginger and vanilla for about 2 minutes. The mixture was smooth when I finished. Then, bit by bit I mixed in the flour, baking powder, salt and milk. I tried to balance adding the solids and the liquids so the mixture became neither too dry nor too wet.

Once done, I lined two muffin pans with the bronze liners. The recipe said it yielded 21, so I left three spaces empty in the pans. Then I poured the batter into the tins, making sure to fill it only about half way.

I placed both pans in the oven at 350 degrees for 25 minutes. I kept an eye on the cakes and ended up removing them a couple of minutes early, because they were done (and a lot bigger than when they started). I covered them with a paper towel and left them to cool for the afternoon.

The afternoon felt like forever. I was so excited to go home and decorate. I even doodles some plans. I knew I might not be able to execute it fully, but I wanted to have an idea of how to even try the decorations. 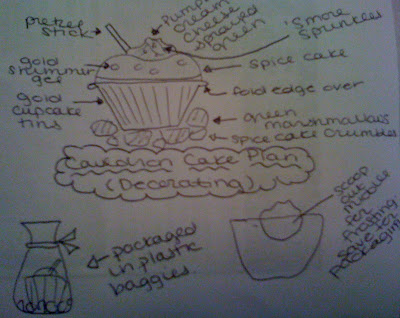 On the way home, I made a quick stop at the grocery store to pick up an orange and cream cheese for the cake frosting. After careful thought, I decided a simple vanilla or chocolate frosting wouldn't do for a cauldron cake. I mean, this is a Hogwarts-worthy cupcake, right? It should be something pretty awesome. I selected a pumpkin cream cheese frosting recipe I found in Country Living.

While perusing the candy aisle to see if anything struck my fancy, I hit the mother load: copper-colored licorice. Rootbeer-flavored and the perfect color, I took it as a sign of fate and bought some deciding I would use it to make cauldron handles. 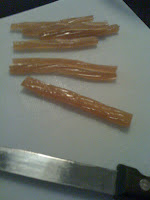 Unfortunately, when I arrived home, I realized I had used up all of my powdered sugar in a previous recipe. I called my sister, who was coming over to keep me company while I decorated, and asked her to pick some up.

Meanwhile, I decided to stay productive. I started by trimming the licorice. I sliced each piece in fourths (down the middle both ways). This was probably the most time-consuming and annoying part of the process. Also, if you're making these with your kids I would encourage you to do it yourself. I almost cut myself and I'm 25.

Once this was done I cut holes in all of the cakes. Why? I wanted to fill them with the frosting and have it flow out so it would be like an overflowing cauldron. I made small holes and only went about halfway in so as not to remove too much of the actual cake. Sister still hadn't arrived with the powdered sugar, so I decided to make the handles for the cauldrons. This turned out to be a good thing. Poking the licorice into the cake would have been much harder and messier if they were already filled.

I finished this up about the time Sis arrived with the powdered sugar. It's pretty basic, but here is what you will need:
1 package of 8-ounce cream cheese (which I let sit out with the butter at room temperature for about an hour and a half before mixing)
1/4 cup unsalted butter (half a stick)
1/4 cup canned pumpkin puree (I still have leftovers I'll use to make bread or pancakes this weekend)
1 teaspoon fresh orange juice (about half an orange)
4 cups confectioners sugar

You mix it for about 5 minutes until it looks like frosting. Next, I peeled back a little of the cupcake tin to make a rim for the cauldron. Then, I spooned it into the holes, making sure it overflowed a bit. 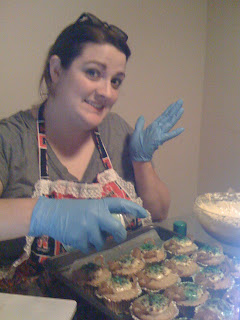 I topped it with the sprinkles and made zig-zagging motions with the sparkly gel. Next, I sprayed the frosting with the green food coloring. I practiced first on some mini-marshmallows so I could get a feel for how it would turn out. I decided to save those marshmallows for later. Tip: don't press the sprayer too hard or you'll end up with a mess. I also wore gloves while I did this so I wouldn't turn my hands green for a couple of days. I finished the cupcakes off by sticking a pretzel into the frosting to be the spoon.

I wanted these to look extra fun for my friends, so I layered the bottom of small plastic cups with the green and white marshmallows and extra pretzels. I hoped this would look like firewood with green flames. I placed the cupcake on top, covered with plastic wrap and called it good.

Though I don't think I will quit my job any time soon to sell decorative desserts, because they didn't turn out THAT good, I will say these were super cute. And they were yummy. Everyone who I gave one to say they thought they were cute and no one told me they tasted badly, so I hope that's a good sign.

Overall, this was a fun treat that perked up my friends' days a little (or so I'd like to think). It was also fun to do, and it's something I'd like to try again with my nephew or some of my friends' kids.

To see any of the other recipes I've tried out as part of Reading in the Kitchen, or to learn more about the series, click on the tab at the top of the page.

Please leave comment and tell me what you think — especially if you try it yourself — or follow me on Twitter @lmchap. We'll be back for another recipe next week. 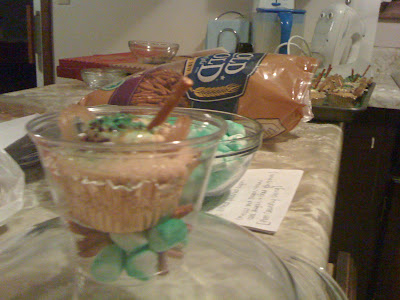