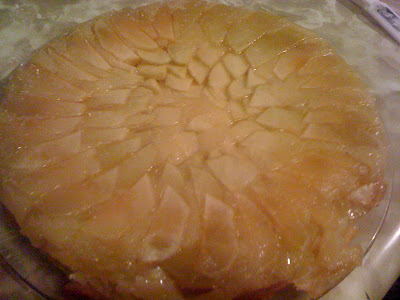 It's National Novel Writing Month, and that means brevity is beautiful when it comes to everything except the book I'm working on (which is going splendidly, thank you). This recipe was easy to make and delicious, which would make it ideal sustenance if you feel like celebrating in between cranking out a couple thousand words on your manuscript.

While looking for a delicious, book-inspired treat, I took a recommendation from Mom. She found a French Apple Cake recipe in Taste of Home and a book called The Apple Cake by Nienke Van Hichtum. 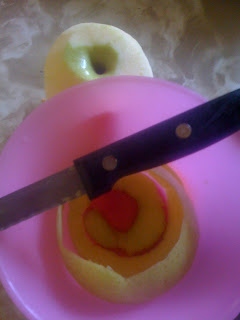 The book is about an elderly woman who wants to bake an apple cake, but does not have any apples. She sets off to market to buy some apples, taking a basket of plums to trade along the way. Her adventures ensue from there.

Mom is always such a good sport helping me out with these recipes, so I decided to make this recipe for her.

The first step was to peel a bunch of apples. When I picked a peck of apples this fall to make other treats, I made sure to grab enough for this recipe. It called for six.

Peeling and slicing the apples was the most time consuming part of this dish.

Every time I peel apples, I always think of the movie "Sleepless in Seattle." In the movie, Tom Hanks' character describes his deceased wife to a radio psychiatrist. During the talk, he says his wife could peel a whole apple with only one long, curly strip. He says it with such admiration — and it's so wonderful when you watch Meg Ryan's character peel an apple the same way — I wanted to do the same. 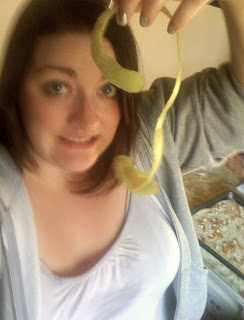 I always peel the first one with such precision and care to ensure I meet Tom Hanks' standard of a wonderful woman. By the second or third apple I lose my patience and and slice the peel in two or three strips. After weeks of cutting apples, I was lucky to still be cutting without taking off a finger or two.

Once the apples were peeled, I heated 3/4 cup sugar, 4 teaspoons of water and juice from half a lemon over medium heat on he stove. After it was lightly browned I poured it on the bottom and sides of the springform pan. Next I lined row after row of apple slices in a circular pattern on top of the caramelized sugar.

In a larger mixing bowl, I beat three eggs, 1 cup of flour, 3/4 cup sugar and half a package (or 4 ounces) of cream cheese. I poured the batter of the apples and carmel and put it in the oven at 350 degrees for 35 minutes.

I'll confess, I was absolutely stoked when I saw how this dish turned out. It was so drama-free and beautiful, I could have cried. Instead, I enjoyed it and shared it with my family and friends throughout the week. It tasted great, looked pretty and is a dessert that is much easier to make than it looks.

When serving it, I topped the cake with homemade whipped cream topping, but you could try something else, too.

Hope you enjoy this recipe, and I'll be back Monday to give a more thorough update on NaNoWriMo. As I mentioned, so far so good. I'm on schedule with my goals and ahead of the word counts suggested by their website.

Have a great weekend and happy writing!
Posted by Laura Chapman