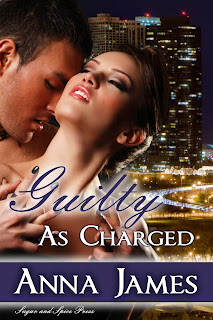 In Guilty as Charged, book one of the Bradford Sisters Trilogy, author Anna James sets up an entertaining and interesting series filled with likable characters and suspenseful plot twists.

Nicole Bradford is the oldest of three sisters orphaned several years earlier when their parents were killed in a car accident. She steps into the role of primary provider and supporter for her two sisters, which leaves little room for her own needs, which makes her admirable and easy to relate to and like. She landed a good job more than a year ago, which provides a good income, stability and a love interest for herself and one of her younger sisters.

But she has a dark past that no one in her present knows about, and she will do whatever it takes to keep that hidden.

Enter Max Paradis. He's back from two years abroad and trying to put his broken marriage behind him. The handsome and smooth man has reason to be leery of secrets, but that does not stop him for falling for Nicole.

Their whirlwind romance makes for a short courtship, but a lot happens in that time.

As with book two, missed communication is the villain to blame for most of the angst. In addition to the other problems the protagonists face, this plot twist works for me.

James effectively foreshadows, explains and concludes the story elements, which might otherwise be confused in such a quick read.

Though this book lacks some of the passionate heat found in book number two, it lived up to its purpose: to introduce the characters the reader will get to know in the upcoming stories.

Both books released to date in the series are solid, and I look forward to reading number three.

Be sure to check back to read my review of Bradford Sisters Book Two: Shattered Dreams and a guest post from author Anna James later today.