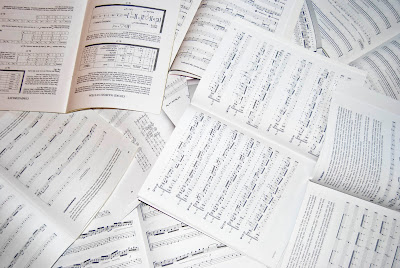 As previously mentioned, music has been a big part of my life since I was born. Dad is a musician, and I played a million instruments and sang growing up. (That's an exaggeration, but I did play oboe, English horn, alto saxophone, clarinet, piano and percussion.)

I also always loved the role music played in the Laura Ingalls Wilder Little House books. Fact: I own the Little House Songbook and occasionally play and sing the music. When I re-read the books, I'll sometimes sing along when it comes to the songs.

Music is crucial for me when I write. I not only use it to help me get in the zone and focus on the words, but it also can set the tone or inspire me. Sometimes music can make you feel more than words alone.

Right now, with my mind focused on my National Novel Writing Month book, I hear or think of songs that fit well with the story. It creates my own soundtrack.

So, at present, if my book had a soundtrack, here are a few of the songs that would appear based on what I have written up to now:


Any guesses on what my novel is about based on it? Does it seem a little angsty to anyone else? Don't worry. My characters are just at a low point. They'll pull through. It might explain why I'm struggling to get through this part of the story, though. It's emotional to write, which can be hard (I take it all personally). But once I'm through it, I know the payoff will be huge.

Does anyone else do this? What are some songs that would be on your novel's soundtrack?
Posted by Laura Chapman