Blogger's note: My college buddy and fellow Laura Ingalls Wilder fan shares the secrets of a good audio book. As a recent audio book fan, I'm excited to check out these recommendations. (Oh, and I love what she says about accents. I gave up Wuthering Heights for the same reason.) 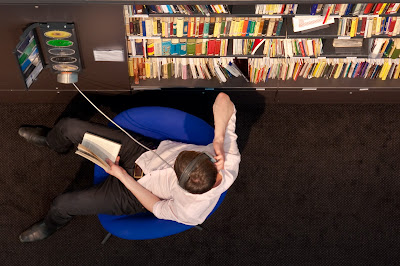 I am very excited to have a day on Laura’s blog while she works on NaNoWriMo. One of the main
interests Laura and I share is that we both love to read (well, that, and we’re both Laura Ingalls Wilder wannabes, which are hard to find!). When I was younger, I thought my dream job would be one where I could read all day, every day.

When I graduated from college, I found a job that let me do that—though unlike my high school dreams of reading novels, I was reading articles on technology. I learned a lot, that’s for sure, but started looking for a job that let me interact with people and learn their stories firsthand. I did, and it came with a lot more driving than I was used to. Not traveling driving, but driving from one end of town to the other. I started getting tired of the radio and my CDs about four months in, so I started listening to books on tape. (They are actually on CD, but books on tape comes so naturally still!)

I normally listen to books on tape when I’m driving home to Colorado to see my family, but I didn’t think they’d be appropriate for the shorter car rides because I would hardly hear any of the story. But you actually do get a lot from an audio book even if you’re only listening for 20 minutes at a time. Eventually those 20 minutes add up and before you know it, the book is over.

The secret to a good audio book is really the narrator. I’ve checked out audio books that are pretty well-known awesome novels—Three Cups of Tea, for example—but the narrator’s voice was too distracting and nasally and I really was not a fan, so much so that I didn’t make it past the introduction. Accents can also be a problem. I tried listening to Sense and Sensibility and the British accents and different voice attempts turned me away, so it was another one that went on the list of failed attempts.

But if you have just the right story and just the right narrator, audio books can be very entertaining.
Here are some of my favorites:
Kitchen Privileges, Mary Higgins Clark
Bossy Pants, Tina Fey
Stories I Only Tell My Friends, Rob Lowe
Susanne’s Diary For Nicholas, James Patterson
Dear John, Nicholas Sparks

Whitney Lake writes about what she reads, her dog, and whatever else strikes her fancy at
wordfancies.com.
Posted by Laura Chapman