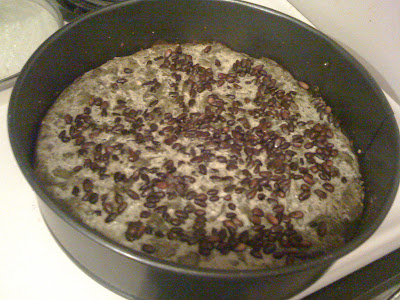 It happened. I attempted a recipe from a book and it was awful.

From start to finish, this dish was a disaster. In October I read Jane Green's Promises to Keep, which features a recipe in every chapter. I took note a few dishes that I wanted to try. What made it especially appealing is a majority of the recipes are vegan or vegetarian. Still on my pescetarian kick, it seemed like a good idea.

I made Spinach Quiche with Herb and Quinoa crust. I was intrigued, because as a vegan recipe the quiche contained no eggs or dairy.

You can check out the recipe for yourself, because I'm not going to go through all the steps. I didn't like it enough, too. But here are a few photos.


In my cooking adventure, I burned the pine nuts and thought the lemon seemed like a suspicious ingredient. I was correct. While the quiche's texture and other flavors (aside from the burned pine nuts) was decent, the lemon freaked me out.

The only redeeming element of this dish was the awesome green color. You don't get a lot of green baked dishes. Otherwise, I have no other word for this dish than disappointed.

I would not be opposed to trying this recipe again, but I think I'll leave the lemon out. I also will buy pre-roasted pine nuts, because I'm not messing with that, again.

I thought I'd remind you of a few previous recipes that might make an appetizing part of your Thanksgiving meals. (It's one week away. Can you believe it?)

Have a great weekend!
Posted by Laura Chapman