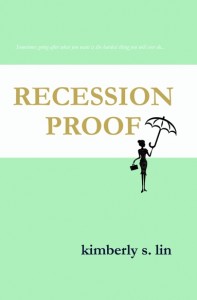 Kimberly S. Lin addresses the economic recession and the financial and emotional impact it has on young professionals in her debut novel Recession Proof.

When the story begins, 29-year-old Helen Smart is trapped in a dead end job and relationship. Neither are "the one," but she is too scared of the poor economy and life as a single woman to venture out on her own.

A likable and relatable protagonist, Helen faces reality after life-altering circumstances and finds herself without a boyfriend or a steady job. Free from her previous shackles, Helen sets out to discover what she wants from life both personally and professionally.

Likewise, Lin successfully creates a great cast of sidekicks, villains and a heartthrob based on reality rather than fantasy. Even the most over-the-top characters — such as Helen's step-mother, step-sister and niece — they are enjoyable and satirical.

Recession Proof is a fast-paced story and quick read that shows the importance of taking ownership of one's own life and being surrounded by positive people who will help you be the the person you want to be — not hinder it.

For me, reading Helen's story was a personal experience. Some of her conversations with friends about feeling trapped or scared could have been based on ones I've had. Like Helen, when the economy fell apart in 2008 I, along with most other people, refused to believe it would have any long-term effect on my life. The recession effected all of us more than we could have imagined. Our stories might all vary, but some parts remain the same.

I would imagine that most young professionals in their 20s and 30s are also experiencing a sort of existential crisis related to their expectations for adulthood and what they received in return.

Lin captures the feelings of isolation and disappointment people experience when they realize their life is not what they wanted. Best of all, the Recession Proof shows you are not alone, and as long as you have ambition and a willingness to work hard, there is hope for your future and dreams.

Kimberly S. Lin is a California native, graduated from UC Irvine with a degree in Economics. After college, she moved to Los Angeles and worked as a financial writer and hedge fund analyst but always dreamed of becoming a women's fiction author.

Utilizing her experiences, she writes stories that are witty, heartwarming and relatable to the modern woman.

Learn more about Kimberly by visiting her website or Facebook page. Check back tomorrow for a guest post from Kimberly as part of the blog tour for her debut novel Recession Proof.
Posted by Laura Chapman