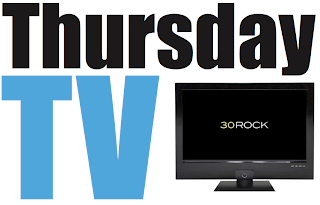 Friends, 30 Rock is back, and I am more excited than ever to see where this season goes after last night's debut.

We have not seen the crew at 30 Rock since May, but it appears they have been busy. Fresh off their holiday breaks, some of the characters appear to have come back changed, while others are as much the same as ever.

The first big news, and probably my favorite part of the episode, was Jenna's big break in the entertainment world. After year's trying to steal the spotlight she has it as the judge America loves to hate on a televised children's singing contest. This story arc provided solid one-liners while she ridiculed the young talent.

For my part, it was nice to see Jenna finally achieve some success and giving Tracy a chance to sweat it out and be jealous.

And Tracy was not the only one reacting to Jenna's work.

Though initially thrilled with the success of the TV show, Jack undergoes a bit of a crisis after realizing he might care more about hurting the children's feelings than a boost in ratings. His sudden conscious comes after being the primary caregiver for his young daughter. With Avery still captive in North Korea (Sidenote: Loved the quick homage to her in a holiday card), Jack assumes primary responsibility for his daughter. In one scene, he sits her down in his office — her dressed in a little pink suit — to tell her about the harshness of life and gain her insight into what to do.

There will surely be more to come from this story based on the things that were not said, and I look forward to seeing how this continues.

For her part, Liz Lemon does not seem entirely affected by everything going on around her. Though normally pessimistic, Liz is super happy throughout the episode, even surprising Jack by saying "I have better things to do than watch Jenna humiliate children." Not even Tracy can bother Liz, and it was fun to see Tracy grow up a little in the process of figuring out what was going on with her.

In another, basically unrelated, storyline, Kenneth is preparing for the end of the world, after his pastor calculated the date of the rapture. He devotes his time to completing the chores he has always wanted, while Frank and the other writers play off his naivete. This was a funny storyline, and meshed with Liz's new motto to "dance like nobody's watching."

My favorite moment of the episode: Liz Lemon busting out some dance moves during an WNBA game.

Overall the episode was the funny we've come to expect from "30 Rock." The episode was not necessarily Earth-shattering, but it was solid and a good start to the season and sets up a few plot elements.

The show will be back next week at 7 p.m. CDT with "Idiots Are People Two!" on NBC.


Be sure to check back later for my reviews of this week's Parks and Recreation and Bones.