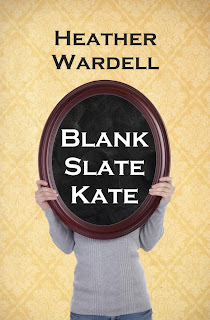 In Heather Wardell's Blank Slate Kate, the main character wakes up naked next to a man she does not know. To complicate matters more, she realizes she is 32 — even though her last memories are of being 17.

Calling herself Kate, the protagonist begins the challenging, frustrating and suspenseful journey of finding out who she is and what happened to the past 15 years of her life. Along the way, she must reconcile whether or not she wants to be the person of her past or forge a new future.

It's hard to say much about this book without giving what I consider key plot elements. Every word from beginning to end drove the story forward. The story kept me guessing, and I truly did not know until the end how it would turn out. I can't remember the last time I read a book and had so many audible gasps or "Oh my Gods."

Wardell crafted the story well, which constantly drew emotions ranging from laughter (such as her astonishment of the boy band craze to sweep the world in the late 90s) and sadness (as she faces tragedies that happened such as 9/11 and Columbine).

Like the title suggests, Kate is virtually a blank slate. Yet, I found her relatable, quite a feat considering I've never suffered amnesia. Initially, the only thing I thought I had in common with her was a mutual love for iPhones. (I have two — one for work and one for personal, and I in no way find that excessive.)  As the story progressed, though, Kate's less relatable issue (amnesia) grows to include ones readers can identify with (desire to appear perfect while overcoming personal demons).

The supporting cast, including her family and friends also added to the suspense. Up until more than halfway through the book, I can say I did not know if I preferred her romantic figure from the past or the prospect form her present. Much like Kate, one minute I would find myself rooting for the new guy, then the next cheering on Mr. Past. (Lucky girl: two studly prospects? No fair.) Then I'd decide I hated them both, and something else would happen, and I'd be torn again.

All of this combined kept the story fast-paced. I devoured the book in one evening, and basically forced myself to put it down long enough to eat dinner.

My only issue with the book? The fact that it made me realize I may have some deep issues to deal with, because I apparently like books and movies where the main characters sustain memory loss (i.e. Sophie Kinsella's Remember Me? and Eternal Sunshine of the Spotless Mind).

Actually, having mentioned both of those stories, I saw a parallel in the theme: your heart does not always forget even if your mind does. That's a powerful thought right there.

This was the first of Wardell's books that I have read, but I know it will not be my last. I'm also going to go ahead and break out this rating for the first time in 2012 (so forgive the dust)... 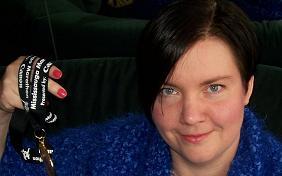 Growing up, I was an avid (rabid?) reader. I am a natural speed reader, regularly clocked at about 1,200 wpm (I read Harry Potter 5 in just under three hours).

After careers as a software developer and elementary school computer science teacher, in 2005 I took up the National Novel Writing Month challenge and attempted to write a novel in a month. I succeeded, and the first draft of my first novel "Life, Love, and a Polar Bear Tattoo" was the result. I realized I love writing. I left teaching, and I haven't looked back since!

Also, Heather's book Seven Exes Are Eight Too Many is available for free on Amazon.

Everyone who leaves a comment at http://www.clpblogtours.com/2011/12/blank-slate-kate-by-heather-wardell.html will be entered to win a $10 Amazon gift card! If you purchase your copy of Blank Slate Kate before Jan. 27 and send your receipt to Samantha (at) ChickLitPlus (dot) com, you will get five bonus entries!