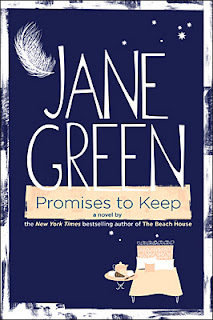 In Jane Green's Promises to Keep, Callie Perry lives a content life as a photographer, wife and mother in small-town New York. Her biggest worries are for her loved ones. Her sister Steffi has trouble growing up and continues wandering through life. Her best friend Lila Grossman has finally found a good man, but doesn't know if it is meant to be. And her parents divorced 30 years ago, and have barely spoken since that time. Also, her husband works too much, and that's a little tough.

This is what I thought the book would be about when I picked it up. Without giving away too much of the plot, just let me say it takes a huge turn halfway through.

Be forewarned: If you read Promises to Keep, you will need a box of tissues. If you are a big baby like me, you might even need two.

While driving thousands of miles across Colorado, Nebraska and Wyoming I took along Jane Green's Promises to Keep expecting relationship drama, backstabbing friends, life makeovers and the like. If you have read Jane Green before, you know the characters go through ups and downs and end up somewhere completely different than where they started. And at least one person in the book will probably be British. (I've only read three of her books, but in all three there were British people, so I guess I drew that conclusion.)

This one is different. It has all of that, but it is sadder than the back of the book or cover gives any indication. I sobbed out loud for about four hours total while I listened.

But being unexpectedly sad isn't what bothered me most. The story was slow to develop, and if I hadn't been listening in my car, I might not have continued. The whole first part of the book felt like back story. I can understand Green wanted to give us a base, or perhaps to create a sense of normalcy, but to me it was distracting. I think it would have been a much stronger story if it would have started about halfway.

While all of this background should have developed the characters, I did not find any of them that relatable or likable. Callie was the one I liked most, but even she was too perfect and everyone else annoyed me. Not having a character to like is kind of a deal breaker for me on a book — but maybe that is just on me.

Once the action started happening, it was almost too fast. What turned out to be major developments in the plot — such as a relationship for Callie, a change in Lila's life, the parents' interaction with each other and most of Callie's story — happened as a blur.

My favorite part of the book was the recipes included in each chapter. Steffi is a vegan/ vegetarian chef, and the characters are always talking about food. (I encourage you to go to her website and try some of them out for yourself. I made the Pumpkin Gingerbread Trifle and it was one of the best things I've ever eaten.)