interview with the authors of "unscripted" 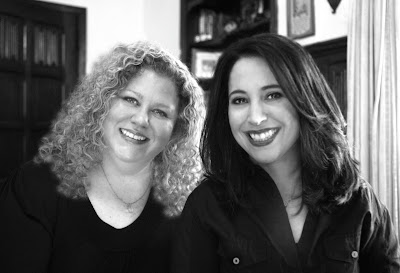 Forget what you know about reality TV. Unscripted, by Natalie Aaron and Marla Schwartz, tells the behind-the-scenes story of a producer and her life in the biz.

After reviewing their novel yesterday — and giving it 4.5 out of 5 stars — I am pleased to welcome Natalie and Marla to Change the Word to give us a behind-the-scenes look at the making of Unscripted.

Change the Word: How did you come up with the idea for Unscripted?
Natalie and Marla: It was a natural evolution – we’re both producers and we had stories we wanted to tell (not to mention our friends’ stories!) And as Chick Lit readers, we knew we’d love to read a book about the behind the scenes world of reality TV — so we decided to actually write it.

CTW: Why did you decide to co-author this story?
N&M: We both had similar pop culture sensibilities — we loved the same TV shows, movies, music and books.  And most importantly, we have the same twisted sense of humor. How many people can say they’ve watched Tommy Wiseau’s cinematic tour de force “The Room” all the way through — twice?  Enough said.

(Blogger's Note: They have me on this one. I've only watched "The Room" in its entirety once. However, I've watched my college newspapers' spoof of it on YouTube a couple dozen times.) 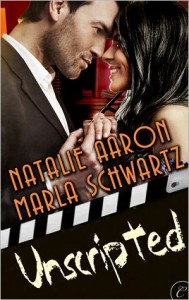 CTW: What is the writing process like when there are two writers involved instead of one?
N&M: Admittedly, it took us a while to find a system that worked. We had great fun talking about the book — we made some light character profiles and had a basic overview of the plot. It seemed so easy — until we actually started trying to write it. We’d sit side by side and stare at the computer — it judged us — and found us lacking. After God knows how many wasted hours we realized the only way we’d be able to write was on our own.  And the only way we could do that is if we outlined the hell out of the book. So we spent months doing just that — and by the end — we had every chapter mapped out. So knowing a few highlights and the basic outcome, we would each take a scene. Then we’d email the pages to each other and make our notes. Next, we’d get together, go over the notes and move on to the next scene.  We loved our system and it totally worked for us.

CTW: What are the benefits of co-authoring a book?
N&M: Number one, we weren’t writing in a vacuum. We had creative feedback, we’d edit each other’s work, and could occasionally pawn off a scene that had us stuck.  Plus, we’d both suffered from the procrastinator’s disease and writing with a partner is a pretty reliable cure. We didn’t want to let each other down (or, err, piss the other one off) so we actually stuck to a pretty strict writing schedule. And lastly, you have someone who knows exactly what you’re going through at every stage of the process…we’re not sure how we would have handled the ups and downs of this mother alone!

CTW: Any drawbacks?
N&M: No — although we’re sure Marla’s husband felt like he had two wives for a while there.

CTW: How did you settle any disagreements or differences of opinions?
N&M: Luckily, we didn’t have too many issues — the winning vote usually went to the person who felt more strongly about the matter.

CTW: What advice can you give to other writers considering a collaborative project?
N&M: For us, keeping our bestie status intact was more important than the book. So we made sure we were on the same page about everything, from writing to promotion — we wanted to be of one mind when it came to all aspects of the book. That’s the only way we could make it work. Our other advice is to be patient — it’s a slow process and at some point you have to just let go and be okay with the big wait.

CTW: What's next for the two of you?
N&M: We’re still working that out…we’ve talked about maybe writing a follow up to Unscripted…we’ll let you know when we do!

CTW: Is there anything else you would like readers to know about you or your work?
N&M: Just that we are so appreciative of the support we’ve received from our friends and fellow writers. So many people have gone out of their way to help us and we are forever grateful. Oh, and to our editor friends out there — Knit Cap isn’t based on you — we swear!

NATALIE AARON was born in Kansas, moved to L.A. and based solely on her astrological sign, was hired as a PA on commercials and music videos - only confirming what she’d heard about L.A. was true.  Natalie went on to such critically acclaimed shows as Taxicab Confessions, Behind the Music and Movies That Shook the World, where she learned how to coax interviews from reluctant celebrities. Her recent producing credits include The Judds, Ruby, Sweet Home Alabama and Little People, Big World.  Natalie lives in L.A. and hardly ever wonders how she wound up doing this for a living.

MARLA SCHWARTZ was born in L.A. but moved to England to pursue a graduate degree in Medieval Studies.  After working as Head Researcher for both Dreamworks Animation and writer/director Andrew Niccol, she began working as a television producer. Marla’s producing credits include Blind Date, Starting Over, Making the Band, Bad Girls Club, Dane Cook’s Tourgasm, and Wanted:  Ted or Alive, an assignment that required her to screen footage of a deer being shot, gutted, and cooked.  Marla lives in Los Angeles with her husband and daughter and hardly ever wonders how she wound up doing this for a living.