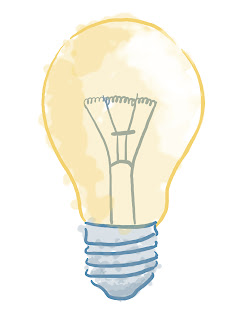 I'm taking a break from the Vile Villains countdown (What can I say? I've been lazy.), because I want to talk about something else.

I want to chat about ideas. That's where everything begins. Someone has an idea and develops it into something more.

I sound totally arrogant when I say this, but I never have a shortage of ideas. The novels, short stories, blog posts, TV shows, movies and other projects I have on my to-do list is quite long. I love that, and have no apologizes for it.

A friend recently asked me where I came up with all of my ideas. That's a tough one for me to answer, because while some people put out fires or kick field goals (super manly professions I just threw out there), I come up with ideas. It's just something I do.


Five Ways to Get Ideas

•  Listen to your dreams. If a dream is vivid enough to keep my attention after I wake, I make a point to quickly jot it down in the notebook on my nightstand or in my phone. I try to put down as many memories as possible before I am completely out of that lucid state. I've actually had a few dreams pan out into scenes in a book or inspire a whole book.

•  Change your routine. I learned this one in journalism school. By changing your routine, such as taking a different route to work, you will not only get your brain thinking differently, but you will also see something new that might inspire you.

•  Eavesdrop. Every conversation you inadvertently (or intentionally) overhear can give you ideas. My writing group buddies and I just talked about this last night. You can not only add some flavor to the dialogue in your book, but who knows? Maybe hearing a girl recall her awful date from the night before might inspire something more. (This is another instance where having a notebook or phone handy will help. I've written down things people have said to me and worked them into stories later. That brings up another point: Be careful of what you say around me. You might end up in a book.)

•  Talk to others. In the past week I have had a few clear instances where talking with others helped me come up with a story idea, or at least plans to tell an already existing idea. For example, Friday night while conversing with a fellow author on Twitter (Natalie Aaron, one of the fabulous co-authors of Unscripted), I shared a personal story. She thought it was funny, threw out a book title and told me to write it, because she wanted to read it. I mentioned the exchange with my sister, who gave me a similar response and a few pointers on where I thought the story might go. By Saturday evening, I had a first chapter written and a rough outline for the rest of the book. Will this turn into a novel? Maybe. If it does, I'll have to send some major props to the woman who helped me come up with the idea. And this is only one example. For every story I tell, I can guarantee there was a moment where a conversation I had with a person transformed it into a better idea. This leads me to the next idea way...

•  Learn from experience. While I'm not saying you have to write a memoir, reality can inspire fiction. Take that story I shared with Natalie. It was a quick anecdote, but the more I talked about it with people and thought about it, the more I realized I could make it into a story. At this point it's stopped being autobiographical, but inspirational works.

Now it's your turn. What do you do to come up with ideas?

Email ThisBlogThis!Share to TwitterShare to FacebookShare to Pinterest
Labels: creativity