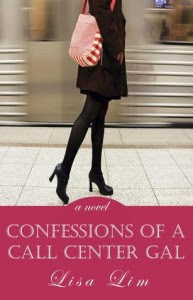 In Lisa Lim's Confessions of a Call Center Gal, a recent college graduate makes the best of her unemployment by taking a crap job to make the best of it.

After graduating with a journalism degree, Madison Lee sends out hundreds of applications to print publications big and small with hopes of landing a job in her field. Even without the recent economic crisis, print journalism has already taken enough of a hit that Maddy finds herself unemployed, broke and bored.

When her college roommate/BFF invites Maddy to visit her in Pocatello, Idaho, the two out-of-work women end up landing jobs at the Lightning Speed call center. Tasked with helping callers from around the world, Maddy somehow finds entertainment with a side of romance at her job.

I enjoyed this book. Maddy served as a quirky narrator amongst a cast of often ridiculous over-the-top secondary and minor characters. The phone calls Maddy takes from customers were funny. Between the rudeness, inarticulateness and plain insanity, I found myself laughing out loud.

Even as some of Madison's encounters bordered on over-the-top, there was a strong enough basis of reality to make it believable. If you have ever worked in a service-oriented field where you are required to make nice with jerks, then you will definitely get it.

And if sometimes Maddy and her friends seemed a little politically incorrect, it is never done maliciously. Other times they might seem immature, but you know what? They're just out of college. Cut them some slack.

It did take a while for me to see where the book was going. Once it got there, I liked the destination. Even with that in mind, it did paint a solid portrait of life in a call center.

If you're shocked by certain types of humor, this book might be a bit much for you. If you aren't into reading about 20-somethings, move along. Otherwise, this was a quick and fun read.

Maddy and her friends also had some growing up to do. Some of it was lessons every young adult must go through in the change from kid to adulthood, such as how to play office politics or move on to bigger and better. Other lessons were unique to this — my — generation.

As a 2008 college graduate with a bachelor's of journalism degree, the initial conflict of the book struck a particular cord with me. Even though I am fortunate to have a job that allows me to use some of the skills I picked up in college, I could relate to Maddy who is not living her initial plan as a newspaper/magazine journalist.

Would you like to know a secret? (*Whispers* Neither are most of the people I graduated with.)

Even if you are not a journalist hopeful, the book is relatable for fellow Millenials/Generation Y-ers who face staggering unemployment numbers and are having to abandon their original plans to land a paycheck.

However, if Maddy could find humor and hope for her future working as a customer service agent with a deranged boss, we can see it in our lives, too.

Lisa Lim is the proud mom of two little girls and three rescue dogs. When Lisa isn't writing, reading or watching "The Office" and "New Girl" she is out walking her three pooches, or rather, her three pooches are taking her for walks. Lisa is also a chick lit junkie and she's currently writing a sequel to her chick lit novel Confessions of a Call Center Gal.

Lisa received a B.A. in Journalism from the University of Wisconsin, Madison. She was a former Technical Writer for a software company and Copy Editor for an IT publication. Her debut novel was featured on The Wall Street Journal blog and was shortlisted for Books to Read in 2012 by LadiesWhoCritique.com.