book review: i've got your number 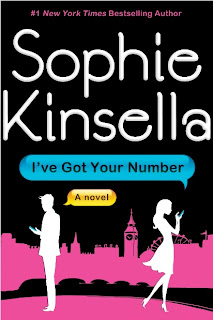 A young woman's life is turned upside down when she loses her engagement ring and cell phone 10 days before her wedding in Sophie Kinsella's I've Got Your Number.

Poppy Wyatt, a compulsive people pleaser, commandeers an abandoned cell phone in the meantime, hoping it will help solve her problems. Instead, it puts her directly in the path of Sam Roxton, an uptight and mysterious businessman.

In exchange for helping him transition between personal assistants, Sam agrees to let Poppy borrow the cell phone short-term. Instead, Poppy can not seem to help herself from meddling in Sam's affairs and likewise the tables are turned. Ultimately, more surprises and problems are in store for Poppy and Sam as she faces her impending nuptials and he protects his business.

You know how people say, "I couldn't put it down," when they enjoyed a book? I lived that cliche last night. As a reward to myself for a challenging work week, I ordered I've Got Your Number on my Nook thinking I could read it as a weekend treat. Instead, I read it in one sitting, with a few short restroom breaks. This book will definitely find a place in my permanent collection and my re-read pile.

I loved it. I probably throw that phrase out too often with books, but in this case, I sincerely mean it. I have read and adored other stories in the past year, but this one reminded me of why I Kinsella is one of my favorite authors. Even in my least favorite of her books, I always manage to be entertained. But when her stories work, it is Brit chick lit gold.

Poppy is a fab character. She is sweet, funny and quirky. Even though with a lot going for her, she has more than a healthy dose of personal doubt and a strong desire to be loved. Instead of being pitiful, she was endearing, and I instantly related to her as a protagonist. I genuinely wanted her to be happy.

I also fell hard for Sam, the new mysterious man on the other end of the phone. Though he might seem short and overly business-like at first, that is hardly the full truth. He might not be as open-hearted and bubbly as Poppy, but you soon see he is mostly guarded — and genuinely a nice, loyal man who cares about others. Go ahead and add him to my "crush-worthy men of 2012" list.

The story's romance also had several totally adorable and sigh-able moments. Consider how they met. Poppy swiped a discarded phone that linked her to him. Sam's first glimpse of her happens when she completely embarrasses herself to help him out. Talk about a meet cute. With several other wonderful moments, it all culminated for me with a brilliant romantic gesture. Without giving away details, let's  say I definitely expected the Thompson Twins to begin playing at any moment. (And now I have to look them up to appease myself.)

The novel featured a few components, which made it stand out from other books. Though Kinsella's other books include text messaging, it became a central component of this story. Poppy and Sam developed their friendship by exchanging texts, emails and phone calls. This book also included footnotes. In poking around at other reviews, it seems this was a turn-off for several other readers, but not for me. The footnotes worked well to poke fun at Poppy's future in-laws, who write books with lots of footnotes, and added an extra level of humor. They were somewhat challenging to read, because (at least on my Nook) the footnotes were all compiled at the end of the chapter. But like I said, I found it a fun and unique twist.

If I had one complaint with the book, it is that I would have liked more of it. Though fast-paced and easy to get through, many of the supporting characters were equally interesting, and I would have liked to see more of them (i.e. Poppy's brothers, friends.) However, no questions were left unanswered, and I suppose it is my greed, rather than need, that drives me to want more.

Kinsella's stories consistently provide solid humor and quirkiness. In this case, she also nailed Poppy's desperation to belong, bouts of loneliness and confusion. While I had many laugh-out-loud moments as expected, I also teared up more than a few times, because I genuinely hurt for Poppy when she was sad.

As a bonus, in reading this novel, I may have discovered a new life motto: If it's in a bin, it's public property. (OK, now go read the book so you can laugh at that.)