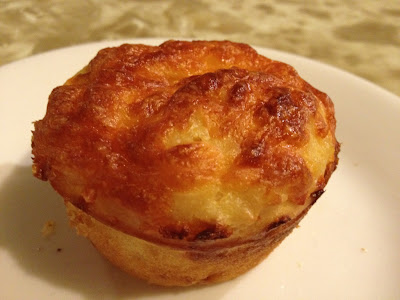 Since I began Reading in the Kitchen, I have mostly worked at recipes where I had to brainstorm and research in hopes I got it right. Often times, the background work seems as exhausting as the actual baking or cooking.

Imagine my excitement when I learned about Sarah Pinneo's debut novel Julia's Child, which includes recipes throughout the book. Then I was invited to participate in her blog tour, and my elation doubled.

Before I forget, thank you Sarah for sharing your novel and this recipe with me (and for letting me share it with my readers). I enjoyed trying out a dish and reading the novel.

The scoop on Julia's Child: "Cookbook author Sarah Pinneo delves into the delicious world of fiction with her hilarious first novel, being published by Plume in February 2012.

Perfect for foodie and all-natural mamas, Julia's Child examines motherhood’s choices: organic vs. local, paper vs. plastic, staying at home vs. risking it all."

In Julia's Child, the author's method for displaying recipes was particularly clever. Pinneo made them part of the story in a natural way. For example, in the dish I made, the recipe came in an email. Aside from being easy to understand and follow, it was cute.

Here is the recipe from the book: 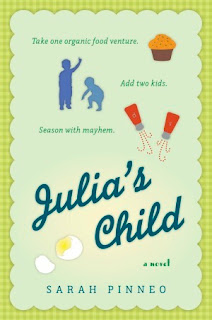 Peel and core the apples and dice finely. If your toddler is helping, peel and slice an extra one to share. If you play your cards right, he or she will be busy eating the apple slices while you're measuring out the dry ingredients. 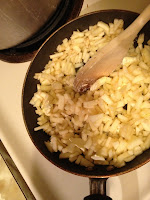 In a small skillet, melt the butter and saute the apple until tender and just beginning to brown, about 7 minutes. Remove the pan from the heat and set aside to cool.

Meanwhile, combine the flour, cornmeal, sugar, baking powder, and salt in a large bowl. In a small bowl, whisk together the egg, milk, sour cream, and 1 cup of the cheese. Stir the wet ingredients into the dry ingredients, then add the apples and butter. Stir just to combine. 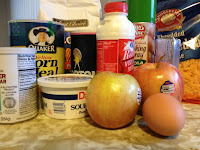 This recipe appeared simple enough to follow... and I am pleased to say it was. The prep took me about 25 minutes, the baking 20 and the waiting forever. Just kidding, but these smelled so good when I took them out of the oven, it felt like it.

I made a couple of modifications to the recipe, not because I disagreed with the original, but for convenience sake. I used Vitamin D milk instead of whole, because I could find it in a smaller container at the store. (I drink soy milk, but I did not want to mess with the recipe that much nor buy a gallon of milk I probably would not use.) I also used margarine instead of butter, because I had it in the fridge, and I have been watching my diet as one of my New Year's resolutions, which means I only use butter or its substitutes for cooking. 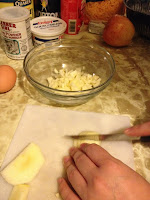 Aside from the cooking spray and the milk, the only other ingredient I needed to pick up for this recipe was the cornmeal. I will pause a moment for a quick cooking lesson I learned. Make sure to carefully read any recipe that calls for cornmeal, corn starch or corn syrup. It's easy to see one, and grab the other in the store even though none of them are at all the same. Fortunately, I was careful about it on this occasion, but two Thanksgivings ago I had to make a few trips to the store because I bought corn starch instead of corn syrup. While I'm sure corn starch has some divine use, it is not a lot of good when baking a pecan pie.

With my ingredients assembled, I set about slicing the apples. Like any time a recipe calls for sliced apples, and you plan to peal, core and chop them yourself, this will be the most time-consuming portion of your prep work. The recipe called for one large apple or two small, but the Fuji apples in my fridge seemed pretty medium to me. Deciding I'd rather have too much apple than not enough, I sliced up two. 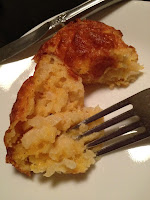 From then on, I followed the recipe exactly as it said, and the final product was fantastic. I love cheese, so baking it inside and on top of any bread tastes delicious. The apple and sour cream were special touches, though. In addition to adding flavor to what would otherwise have been cheesy cornbread, it also made the muffet more moist. I love cornbread, but often times it feels dry. Not with these.

As an added perk, when I entered all of the ingredients into a recipe calorie calculator, the total came to 173 calories. That's not bad when you consider how delicious this was. I didn't feel guilty eating it. However, it did have 10 grams of fat, but if you limit yourself to one it is fine.

Pleased with how they turned out, and determined not to sit down and eat the remaining muffets by myself, I shared them with others.

My broomies were first to taste them after returning from a Nebraska basketball game. I was already in bed when the broomies tried them but said it was "good." That basically translates to, "I enjoyed it. The flavors and textures worked together to create a divine taste sensation. You are a wonderful sister, and we appreciate you made us treats. We love you." (At least, that's how I translate it.)

I took them to work the next day, after they were no longer warm from the oven, but more room temperature, to see what a couple of my favorite co-workers thought.

I received the expected, "It was pretty good," and "I liked it." But I also received a phone call from one co-worker that went something like, "I love it. Oh my God... (difficult to understand praise)." OK, maybe I'm exaggerating, but she did say she loved it and that she planned to make it herself (although we have visions of cutting out some of the fat calories to make it more Weight Watchers and diet friendly).

I will definitely add this recipe to my permanent collection. I wouldn't mind checking out another one of Pinneo's future books, either.

Read my review of Julia's Child.

About the author:
Author Sarah Pinneo, like her character Julia, understands the work vs. stay at home decision. Sarah was a Wall Street dealmaker for ten years before making the transition from breadwinner to bread baker. Now a food journalist and co-author of The Ski House Cookbook, Sarah blogs on her home page at sarahpinneo.com, and at Blurb is a Verb on SheWrites.com. She lives with her family in Ludlow Vermont, and Hanover, New Hampshire.