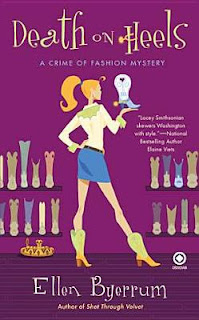 Death on Heels, Ellen Byerrum's latest installment in the Crime of Fashion series, forces the main character to reconnect with her past as she attempts to find the truth about a string of murders after her ex-love is charged with the crimes.


When fashion reporter Lacey Smithsonian moved to Washington, D.C., from rugged, small town Sagebrush, Colorado, she thought she’d never look back. But when her former boyfriend, cattle rancher Cole Tucker, is arrested for the murders of three women, Lacey digs her cowboy boots out of her closet and hops on the next plane.

She is certain of Tucker’s innocence, until he abducts her during a daring courthouse escape. Is Tucker capable of murder, too? Or is there a larger conspiracy in the small town? Lacey needs to rustle up all the help she can get for this case before her old flame is snuffed out for good...

Though a little slow to get to action, Lacey's misadventure picks up after she arrives in Sagebrush. A funny and likeable character, she acts as a solid guide for the audience to navigate the story. While distinguishing between the truth and lies related to the case, the character also balances her fashion job back in D.C., and her personal and romantic relationships.

The secondary characters are also well done. From her quirky friends and family members to the shady people she meets along the way, the cast pushes the story forward. I especially enjoyed the early scenes that puts Lacey, her mother and sister together. Anyone with family can appreciate the mix of annoyance, frustration and love that comes with the territory.

Byerrum also sets up a nice romantic puzzle for Lacey, as she deals with her sexy ex from the past and the hunky boyfriend of her present. Fans of romance and mystery will find this a good blend of both.

This was my first in the Crime of Fashion series, and I would definitely check out the others in the series. Especially for the next book based on how things were left in this one...


Check back tomorrow for a guest post from the author.

Email me at lmchap@gmail.com by 11:59 p.m. CDT March 31 for your chance to win a print copy of this book! Include your name and mailing address with the subject line "Death on Heels Giveaway." The winner will be selected April 1. Best luck to all. (Open to U.S. and Canada readers only.)

Ellen Byerrum writes the popular Crime of Fashion mysteries, set in bustling Washington, D.C., The City That Fashion Forgot. Featuring style sleuth Lacey Smithsonian, who solves crimes with fashion clues, the eighth book, Death on Heels, takes Lacey out of her comfort zone and into the Wild West where she confronts her past and an old boyfriend who is accused of murder.

While researching fashion, Byerrum has collected her own assortment of 1940s vintage dresses and suits, and the occasional accessory, but laments her lack of closet space. She has been a D.C. news reporter in Washington, a playwright, and holds a Virginia P.I. registration. Although she currently resides in Denver, fashion reporter Lacey Smithsonian will continue to be based in Washington, D.C.

Byerrum is currently at work on the ninth book in the Crime of Fashion series, Veiled Revenge. You can find more about Ellen on her website or on Facebook.
www.ellenbyerrum.com
www.facebook.com/EllenByerrum