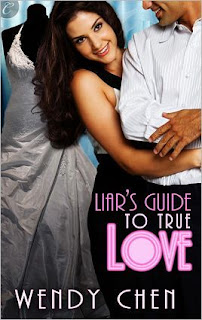 Cass Handley is good at giving New York brides the wedding day of their dreams. Fun, stylish and complete with a cast of  hilarious and supportive friends and a nutty family, she is a wedding planner star on the rise, it seems she is destined for greatness.

Except when it comes to finding love. For one, she has trouble cutting off ties from an ex. Worse, she has an annoying habit of lying to the men she meets. Most are small fibs, seemingly harmless to men she only dates once or twice (Like saying she went to Mexico with Habitat for Humanity, when she really spent a week there with her family). Though she vows to put an end to her lies, she finds herself making one final big one: telling a wedding hating man otherwise too perfect for words she words in advertising instead of the biz.

Mayhem ensues as Cass navigates the complexities of a budding relationship, suitor from the past and a menagerie of bridezillas.

Though a little too back story heavy from the get-go, Liars eventually found its groove. Once the action was under way, the story had me flipping pages and frequently laughing out loud. With a nice blend of one-liners and long-con jokes, the humor was not forced and flowed well. Weddings gone awry offered plenty of comedy throughout, too.

Cass is a likeable, if sometimes enviable, character. (I pondered how that girl manages to down all of those lattes and takeout orders while managing to look sexy in her clothes as I nibbled on a piece of celery.) Her core group of friends are quirky, supportive and enjoyable to read. They frequently serve as her conscious offering up advice and bickering with each other as they decide Cass' life. Her mom is over-the-top, her sister has more depth than initially thought and her father is sweet.

Then there are the men. Even the ones who do not work out are funny to read. Never mind the new man in her life who had me crushing on him by the end of our -- or rather their -- first date. Watching their relationship develop had a solid mix of will-they-won't-they angst that pushed the story forward.

In addition to the blur of humor and romance, the MC gains valuable lessons about honesty, forgiveness and learning from the past.

About the Author:
Wendy Chen writes novels for lovers of chick lit and lighthearted romantic fiction. She began writing Liar's Guide to True Love during her frequent (and sometimes severe) bouts of wedding nostalgia. Years after planning her own nuptials, she still gets unduly giddy about attending weddings.

Wendy was a lifelong New Yorker until she decided to try out suburban life a few years ago. She now lives in Northern Virginia with her family while she works on her next novel.