Blogger's Note:  I am pleased to share a summary and excerpt of Kathy Lynn Harris' Blue Straggler with you, today. Be sure to check back later for my review of the novel. 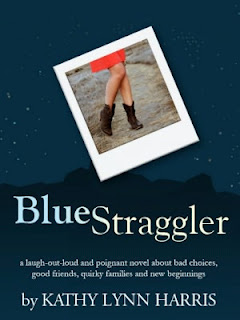 A blue straggler is a star that has an anomalous blue color and appears to be disconnected from those stars that surround it.

But this is not a story about astronomy.

Bailey Miller is “disconnected” from the cluster of her rural south Texas family. She has never quite fit in and now in her early 30s, she finds herself struggling with inner turmoil and a series of bad choices in her life.

Bailey’s drinking too much (even for a member of her family), has a penchant to eat spoonfuls of Cool Whip, works in a job that bores her beyond description and can’t keep a relationship longer than it takes for milk to expire in her fridge.

Even with the help of her two outspoken friends, Texas gal Idamarie and her quirky college pal Rudy, she’s having a hard time.

So she packs up her Honda and heads out of Texas in search of herself and answers to secrets from her great-grandmother’s past. The novel takes readers on a journey from San Antonio, Texas, to a small mountain town in Colorado and back again, as Bailey uncovers not only the secrets of her great-grandmother’s life, but also some painful secrets of her own. All while finding love along the way.

If you have ever wondered why you got stuck with the family you did, what you are doing with your job and your life, or had a sudden desire to run off to the mountains, sit back and join Bailey for this laugh-out-loud, yet poignant ride. It’s women’s fiction at it’s best!


The air in my parents’ living room feels dense with the age of old furniture and paneled walls. The quilt curled around me is worn and nearly sheer in some places, and the smell of mesquite smoke lingers on my clothes and hair. A tractor engine grinds from gear to gear outside. I squint at the grandfather clock across the room. Ten o’clock. Sunday morning.

I’m unsure why I’m on the couch and not tucked in my old bed upstairs. Then I remember fragments of how last night played out. I let Floretta, who will remain in Texas for the time being it seems, talk me into one of her world-renowned margaritas. And then another. Most likely another. I fuzzily recall thinking the stairs to my bedroom were not something I wanted to tackle. I’m certainly on a roll when it comes to tossing down booze like water. Or bad medicine. My dad would say I’m on slippery slope. And I know it.

The ticking of the clock, which used to offer such security in its steady tempo, is as obnoxious to me right now as the heat in this house. My parents installed central air years ago but never turn the unit below eighty. I kick off the quilt, knocking over three framed photographs from the table at my feet. I know without looking they’re of Mike in his high school baseball jersey—sophomore, junior and senior years.

I move to the end of the couch, in what could appear to someone else as slow motion, and slide the pictures of Mike behind a lamp. I open the creaking wooden doors of the lamp table, knowing that’s where Mom keeps a lot of old photos she hasn’t placed in one of her scrapbooks yet. I’m hoping I’ll find at least one decent one of me to replace one of Mike’s.

I grab handfuls of pictures and separate two or three. Most are Polaroids, gradually losing their color bit by bit. Miniature specks of green and red are peeling from a Christmas picture; images of one hunting dog are fading onto another. I do find a picture of me, with a particularly puffy perm, festooned in a pink chiffon prom dress. A boy named Bubba hangs on my arm. This was Bubba Number Three. I dated two other boys named Bubba. Statistically, in this county, it was bound to happen.

Another photo catches my eye—this one’s much older. The corners are smoothed to rounded edges, and the blacks and whites have mellowed to grays and sepias. A handwritten note on the back shows through to the front. It says, “Annie and Will, 1932.”

Something about the woman’s eyes, the way she’s holding her mouth, her posture even, seems familiar—as if I’m looking at someone I’ve known my whole life. Yet I have no idea who she is.

The woman is lovely in a natural way, her brown hair all in curls. Her arms are wrapped around her waist, like she’s giving herself a hug. The man standing next to her, dressed in a suit, is at least a foot taller than she is. He sports a set of very large ears. They both appear to be in their twenties, though I’m never good at judging the age of people from other generations. They seemed to age faster than we do now.

I jump at the slam of the screen door and catch a glimpse of my mother carrying in a large Tupperware bowl full of okra and yellow squash. I can smell the Suave lotion on her legs from here.

“Well, well, Sleeping Beauty awakes,” she calls from the kitchen, making far more noise than any kind person would. “Could you turn it on the Classics channel? I think they might be having that Elvis movie marathon today.”

She stands in the hallway, turns on a small fan and looks at me. “You know not to have that many of Floretta’s mixes, Bailey.”

I lean back on the stiff woven fabric of the couch and watch in near-horror as she removes the vacuum cleaner from a hall closet. As she reaches for the power cord, I wield the photograph like a white flag.

She drops the cord. A reprieve.

She wipes her hands on her cotton shirt. It’s one of the old promotions for the business and reads “Don’t be Chicken about your Movable Cows” across her chest. She sits down on the couch, almost crushing my toes. I put my feet on her lap, and she turns her nose up at my fuchsia toe ring. I try to spread my toes apart by sending spirals of good thoughts like my yoga instructor tells me to do. I end up flicking the toe ring off. We both watch it fly across the room.

“I hope Willie or Waylon doesn’t get a hold of that,” she says.

She grabs the picture from me and puts on her glasses, which were buried somewhere in the blond-silver hair on her head. “That’s your great-grandmother Annie and husband number one of five.” She hands me back the print, takes her glasses off and begins to stand.

I sit up and try to stop her with my legs. “What? How come I’ve never seen any pictures until now? And more importantly, why didn’t I know I had a relative who was married five times?”

Mom acts distracted by non-dust on the coffee table for a second, seems almost embarrassed that she’s let out some long-hidden secret. “I don’t wish to discuss this.” She shifts and has this look on her face as if my dad, with receipt in hand, has just caught her in a lie about how much she spent on Christmas decorations again.

“Mom, I realize you weren’t close to this woman. But she was your grandmother.”

“Skip it, Bailey.” She gets up and begins to tidy her already-tidy knick-knacks.

“That woman doesn’t deserve one ounce of conversation.” She pushes Mike’s pictures back to their original placement and puts her hand out, palm up, a signal for me to place Annie’s photo in it.

“What’d she do that was so terrible?” I’m trying to sound nonchalant, but this little segment of family history is stirring up my mother like a swarm of yellow jackets.

“There is no story. Period.”

“I think there is,” I say. This is getting under her skin more than any other conversation we’ve had in years.

“Maybe …” I say, watching my mom’s face. “Maybe she was just misunderstood.”

She flushes, and I can tell she’s mad—mad I’ve defended Annie. “Does running off to another state and leaving your family,” her words are as harsh as if I were the one who left, “leaving your two little children, does that mean you’re just misunderstood?”

Mom picks up the remote to find Blue Hawaii. I can tell she’s tucking the anger back in place. When she turns to me, she seems to have moved on, and now clearly does not like what’s in her direct line of sight. That being me.

She frowns. “Bailey, I swear you look like ten miles of bad road.”

I fall backwards again and hug a crocheted pillow to my chin. The yarn is rough, and I can feel the fibers sneaking their way into my nose.

“Are you drinking like that all the time?” she asks.

I wish we could’ve stayed on the more benign topic of my wicked witch of a great-grandmother. I pull the pillow over my eyes and miniature fuzz balls grab my eyelashes.

“Your daddy is worried sick.”

I let out a sarcastic laugh. “Dad is not worried about anything but the hay crop this summer, and oh yeah, I think we’ve exchanged four words since I got home.”

She wrestles the pillow out of my hands. “Please don’t exaggerate, Bailey. Michael said you were hung over yesterday, too.”

“You lie,” she says, then turns her attention to Elvis. Thank God for the King.

At a commercial, she grabs my quilt to put it away and a pack of cigarettes tumbles out. I squirm as she picks up the gold wrapper as if she’s found a used condom.

“Don’t tell me you’re smoking again?” Her words are chock full of disappointment. Like she’s just found out I’m a prostitute. Or worse, a Yankee. And like my father doesn’t smoke a pack a day.

“It surely does look that way, doesn’t it?” I say. But I’m thinking, do people not understand everyone needs at least one ongoing vice? And don’t they realize nicotine is chemically addictive and I’m not really at fault here? Okay, maybe a little at fault.

She says this as if it will change everything about me. 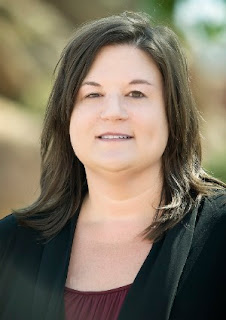 Kathy grew up in rural South Texas — and comes from people who work hard, love the land and know how to have a good time on a Saturday night. As a writer, Kathy was lucky to have been surrounded by exceptional characters throughout her life, many of whom have lived their lives exactly the way they wanted. The rest of the world could take `em or leave `em! Inspiring, to say the least.

In 2001, Kathy made the move from Texas to the Colorado Rockies to focus on her writing and soak up All Things Mountain. She lives in an authentic log cabin near the southernmost glacier in North America, at 10,500 feet above sea level, with her husband and son, plus two fairly untrainable golden retriever mixes. It is there that she writes.

Read more from Kathy on her blog, You Can Take the Girl Out of Texas but...

Blue Straggler is available on Amazon in eBook and paperback format now!

Check back for my review of Kathy Lynn Harris' Blue Straggler. View other reviews, interviews and guest posts from the author on her Chick Lit Plus Blog Tour here.

Email ThisBlogThis!Share to TwitterShare to FacebookShare to Pinterest
Labels: chick lit plus, excerpt