the tart from the bakery

Blogger's Note: In honor of my obsession with The Hunger Games -- now a motion picture -- I created a three-part series featuring dishes mentioned in the book. This is the third. 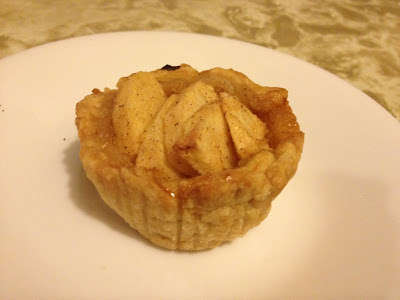 If you follow the blog, by now you know I have a creepy old lady crush on Peeta Mellark. Not even kidding. When I read the book, I hung on his every word. It's no wonder that when he off-handedly mentions having an apple and goat cheese tart for sale in his family's bakery, it stuck with me.

I wasn't the only one listening, though. Katniss heard it and recalled Peeta's father buying goat cheese from her regularly. She also felt badly for Peeta, because all of the bread and treats his family ate were stale, because the fresh went to paying customers.

I was determined to make a beautiful and delicious tart in his honor. I've made cheesecakes and pies, before, so I did not imagine this being too different. Just the same, I looked up about 10 recipes for goat cheese pies and tarts before deciding the recipe.

Going with my theme this whole series, I tried to keep this as simple as possible. Even though, as you will see, it may seem like there are a lot of ingredients, there really aren't that many. I figured that even the city folk in District 12 would be somewhat limited in their supplies. For example, I figured everything would need to be used sparingly. And recalling Katniss' wanting to sweeten her wine with honey, I decided to use it as a sweetener in lieu of too much sugar. 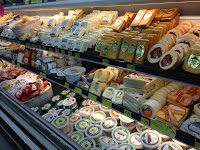 I'm also pleased to say that with the exception of the $3 I spent on goat cheese, I had everything else in my pantry or fridge. Katniss would be so proud of my frugality.

However, I did spend almost as much time picking out the proper cheese as I did making the mixture. Go for a soft goat cheese of almost cream-cheese-like consistency. It's easier to work with.

With the taste figured out, I drew up a few sketches of how I wanted these to look. Peeta is an artist, and apparently a good one. These had to be beautiful. I plotted a few designs, I'll centered around some artistic use of apple slices, and felt prepared to make my tarts. I invited over a few friends and fellow fans of the games to try these ones. 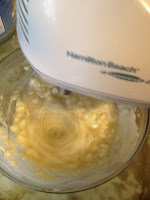 Make the crust about two hours before the rest of the dish. Mix together the dry ingredients in one bowl. Cut in the shortening with a pastry blender or a fork and knife until it resembles crumbs. Mix 4 tablespoons of cold water with one egg in a large bowl. Add the other mixture in small sections. Do not overmix. Add final tablespoon of cold water. Gently roll into a ball without over-handling and cover with plastic wrap and refrigerate about two hours.

Preheat the oven to 350 degrees. Mix together goat cheese mixture until it is creamy. Mix egg yolks and water in a small bowl and set aside for pie crust.

Remove half of the pie crust dough from the fridge and freeze the remaining portion. Divide into 12 small balls. Roll out and place in small tart pans or in lined-muffin tin. Dust the dough with egg wash. Bake crust in the oven for five to 10 minutes.

Spoon cheese mixture into the dough, filling each about halfway. Bake for 10 minutes until the cheese sets. 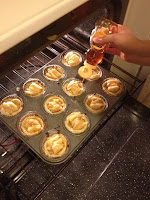 While cheese bakes, peel and slice apple. Mix with sugar, corn starch and cinnamon. Arrange slices on top of the cheese. Drizzle honey on top of the apples. Bake for 20 minutes.

Remove from oven and allow to cool about 20 minutes. Serve warm.

Once they cooled, I removed the finished tarts from the muffin tins and was pleasantly pleased with how cute they looked. At the time I made them, I kept moaning about how fugly they seemed (though my sister assured me there were not). And even though I did not get to use the designs I originally planned, because they were too small, I still like how they look.

I served them to my friends with positive reviews...

Kaitlin: Scrumptuous. I like the tanginess of the cheese combined with the sweetness of the cinnamon and apple.

Sarah: I like the crust. I've never had goat cheese before, so I was expecting not to like that. I expected it to taste like stinky cheese, but it did not taste like stinky cheese. Cinnamon apples is one of my favorite flavors so I loved that. I like that you had the idea to put honey in it even though it wasn't mentioned, because it's something they definitely would have had access to it and it tasted good.

For my part, I loved them. They were every bit as delicious as I imagined when I read about them. I imagine they would be an amazing treat for anyone in District 12. And because I'm not the Mellark's, I ate mine before they went stale.

Not to brag, but I'm getting pretty good at pastry crusts -- especially considering that I don't typically like it. The filling was light and fluffy and the apples and honey were a sweet touch. Plus, because they are small, each serving has about 200 calories in it and doesn't overload you with richness.