book review: the devil has dimples 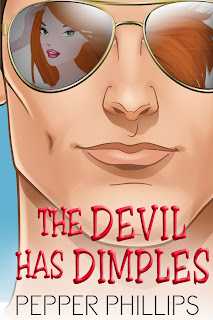 A young woman must uncover the truth behind her origin and upbringing before moving on with her future in Pepper Phillips' The Devil Has Dimples.

Still dealing with the death of the only mother she has known, Sara McLaughlin's world takes a shock when she discovers that she was not only adopted, but that her birth mother has died. She rushes to Boggy Bayou, La., to confront the lawyer who sent her word only to learn that the situation is more complicated than she thought.

Not only is she shocked by word of her adoption and the terms of her birth mother's will -- which stipulate that she must stay and work in the town for six weeks if she wants to inherit anything -- but Grant, the lawyer, is gorgeous devil of a man with dimples who will be her roommate if she stays in town.

Determined to uncover the mystery of who her father is and why she was secretly put up for adoption, Sara relies on the help of Grant and meddlesome townspeople to find the truths. Along the way, the couple opens up more than a few old wounds while also toying with the new feelings developing between them.

A fast read that had my interest from the get-go, The Devil Has Dimples offers an entertaining mystery as the main characters piece together broken history. With a satisfying conclusion, and more importantly a compelling journey, the novel maintained its momentum well. It also settled the most crucial questions (Namely, who's the daddy and why was Sara adopted).

The main couple was a fun one to follow. With instant attraction and sizzle from both sides, Sara and Grant were clearly smitten and the tension was good. Sara was a likeable character and a solid protagonist. Grant was a delicious heartthrob. What's not to like? Their interaction with each other was enjoyable -- whether sharing a meal at home or following the mystery's trail.

Perhaps the story's strongest element is its depiction of a small town filled with busy bodies who know everything, but still manage to keep a few big secrets under wraps. More specifically, the story truly captured the spirit of Louisiana. Though I am no expert on the state, I traveled there for business every other month for three years, and this story took me back in the best ways.

The Devil Has Dimples was well worth my time and a pleasure to read.

Be sure to check back tomorrow for a guest post from the author.
Read an excerpt of The Devil Has Dimples here.

Pepper Phillips wrote her first play in the seventh grade. But before that she read every book in her age group at the small local library. An only child, she entertained herself in the worlds she created in her mind. She's still pretty mindless in some respects, but her writing world is where she is the happiest. She ventured into self-publishing in 2011.