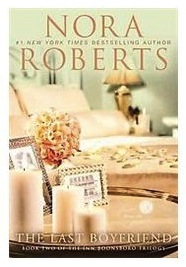 The Montgomery men are back in the second sexy installment of Nora Roberts InnBoonsboro trilogy. If I did not already have a crush on them, I certainly would after reading The Last Boyfriend.

In book two, the hyper-organized and ultra sweet Owen sees longtime family friend and pizzeria owner Avery in a new light after Lizzy, the ghost at the Inn literary pushes them together. The two have a lot of history. Not only is Owen technically Avery's business and apartment landlord, but they grew up together. Avery fell in love with Owen when she was five, declaring she planned to marry him someday, and he played along. Contrary to what either of them says, neither ever quite got over that puppy love.

While exploring a new personal relationship, they also delve into another business venture together and deal with an unwanted visitor from Avery's past. Fighting a lack of time and Avery's fear of falling in love, the couple comes to realize that a first boyfriend or girlfriend has the potential to be the last and permanent.

This story was ridiculously adorable, even if it had similarities to other books in Nora's past. I said it when I reviewed The Next Always, and I'll say it again: you can always count on a well-written and entertaining story when it comes to Nora. No matter what. Yes, we've seen the ghost in the inn. Yes we've had longtime friends fall in love years later. It's still a good read.

After reading about the renovations in book one, we see the Inn BoonsBoro have its grand opening, which is a complete treat. Based on the real hotel Roberts and her husband own, the place sounds fantastic. A historic building brought back to life, each room's theme focuses on a couple from literature. There's an Elizabeth and Darcy, Buttercup and Westley, etc. If I am ever in the area, I have to see this place. So good job on the advertising, Ms. Roberts. It worked.

My favorite part of the book was the Montgomery men. They are completely crushable. I thought I had it bad for Beckett, until I got into Owen's head. What a total cutey. He deals well with Avery's crazy and loves her for it. (Avery is also a fun protagonist who compliments her man well.  But the men really shine in this series.) Based on the tension already sizzling between the final brother, Ryder, and the innkeeper, I can already imagine how delicious book three will be when it is released in November.

A quick read, I found The Last Boyfriend delightful and it kept my interest. The only drawback was that the end felt a little rushed to me, but the final conclusion was satisfying enough. Well done, Nora. Well done as usual.