Set in our future, Kiera Cass' The Selection tells the story of a young woman taken from a humble upbringing and placed in the limelight to compete for the heart and hand of her nation's prince.

Here is the scoop on the book: 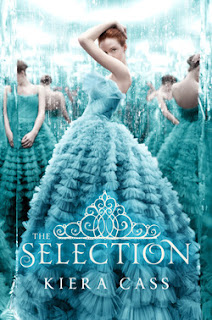 For thirty-five girls, the Selection is the chance of a lifetime. The opportunity to escape the life laid out for them since birth. To be swept up in a world of glittering gowns and priceless jewels. To live in the palace and compete for the heart of the gorgeous Prince Maxon.

But for America Singer, being Selected is a nightmare. It means turning her back on her secret love with Aspen, who is a caste below her. Leaving her home to enter a fierce competition for a crown she doesn't want. Living in a palace that is constantly threatened by violent rebel attacks.

Then America meets Prince Maxon. Gradually, she starts to question all the plans she's made for herself — and realizes that the life she's always dreamed of may not compare to a future she never imagined.

The Selection is a cute read well-suited to a young adult audience. While I enjoyed the story, it was not what I expected. Pitched to me as a cross between The Hunger Games and The Bachelor, I found it leaned significantly more toward the latter. I was OK with that, but it forced me to make more comparisons between The Selection and The Hunger Games than I might have otherwise made. I wish it had not been made, because it was not fair to either story.

Both stories are dystopians set in the not-to-distant future in the remains of what once was the United States. Both address a society with disparity in wealth between groups of people, but aside from that there is little in common. Katniss must fight other children and survive in harsh conditions as part of a game designed to squelch rebellion and force submission. If she loses, she dies. America's biggest problems come from bickering with catty girls competing to become the future queen of their country. Oh, and she can leave any time she wants. If she loses, the punishment is not death, but going home.

While touching upon serious issues such as caste systems, wars and broken economies, at its core, The Selection was more about a young girl torn between the love who broke her heart and a new suitor who is more into her than she is into him. Yes, one is poor and the other is rich, but ultimately America seems more interested in who she will live a happy life with than who has more money. That was a fine enough concept and lesson for me.

However, with two more books to go in the trilogy, it is possible the story's focus will shift and delve more into the complexities of the society featured in the story.

Even if it does not, I am still interested enough in America's love life, I will definitely read the second book once it is released. The teeny bopper still alive and well inside of me wants to. Though I did not develop an instant attachment to America, by the end of the story she becomes more likable, and I found myself rooting for her.

I am also going to come out and say that I am definitely Team Maxon. While Aspen has some merits, at the end of this book I am more into the prince with a gentle heart than the young man who trashed America's.

Now if only I can decide whether or not the new CW show based on the book will be worth checking out...