excerpt: shadow on the wall

Blogger's Note: I am pleased to welcome Pavarti K Tyler to the blog, today, as part of her Goddess Fish blog blitz for her book Shadow on the Wall. Please enjoy this excerpt for your reading pleasure. 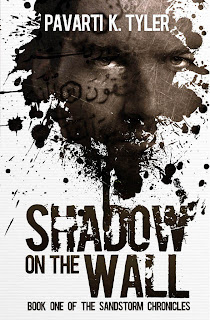 Controversial and daring, Shadow on the Wall details the transformation of Recai Osman from complicated man to Superhero. Forced to witness the cruelty of the Morality Police in his home city of Elih, Turkey, Recai is called upon by the power of the desert to be the vehicle of change. Does he have the strength to answer Allah's call or will his dark past and self doubt stand in his way?

Pulling on his faith in Allah, the friendship of a Jewish father-figure and a deeply held belief that his people deserve better, Recai Osman must become The SandStorm.

In the tradition of books by Margaret Atwood and Salman Rushdie, Shadow on the Wall tackles issues of religion, gender, corruption and the basic human condition. Beautiful and challenging, this is not a book to miss.

Recai sat up too quickly and fell back against his mattress gasping as Rebekah stuck her head into his small room, her face creased with worry and fear.

“Cover yourself and stay silent,” she whispered before closing the door and rushing back into
the living room to retrieve her burqa and open the door. Recai heard the movement of the heavy fabric she wore on top of her house dress as she moved across the room to greet their visitor. He wondered if she had retrieved her father’s gun which he’d overheard Hasad say was under the couch in the living room.

Before hiding beneath the thin sheet that covered him, he reached down and pulled the rug from the floor and threw it across his legs. He covered his head and melted against the wall with the pillow on top of his upper body. Feeling foolish, Recai laid there, wishing he had his ID, his phone, anything to help bribe his way out of this situation if it was indeed the RTK at the door.

Perhaps it’s just a neighbor, he thought. A neighbor come to ask after Rebekah’s father’s health or to borrow some salt. His attempt at rationalizing the unexpected visit did not quell his fears. The RTK made a habit of performing home inspections, especially if they suspected a woman alone. It wasn’t a safe time for anyone under the jurisdiction of Mayor Yilmaz. 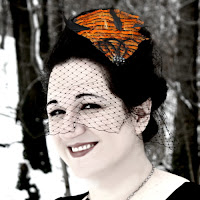 Pavarti K Tyler is an artist, wife, mother and number-cruncher who has been committed to causing trouble since her first moment on this Earth. Her eclectic career has flirted with Broadway, Teaching, Law Firms and the IRS. Author of many short stories, Pavarti spans genres from Horror and Erotica all the way to Fantasy. Currently Pavarti is hard at work establishing her Indie Publishing Company Fighting Monkey Press.

Pavarti K Tyler’s novel Two Moons of Sera is a Fantasy/Romance and began in a serial format in November 2011. Her next novel Shadow on the Wall is scheduled for release in May 2012. Shadow on the Wall is Book One of The SandStorm Chronicles, the saga of Recai Osman — businessman, philosopher, Muslim and . . . superhero.

My blog is all ages: http://www.fightingmonkeypress.com
My tumblr is 18+ only: http://pavartidevi.tumblr.com/
My Fan Page needs your likes: https://www.facebook.com/#!/FMPress
My Twitter likes friends: http://twitter.com/#!/PavartiKTyler
My Google+ is random: https://plus.google.com/?gpinv=JFSVnKSj7Uk:FdjR-3NCJW8#me/posts
TRAILER FOR THIS BOOK: http://youtu.be/MeWoIv5osNc