Blogger's note: Reading in the Kitchen will get a little sexier in the month of May as I make dishes from E L James' best-selling Fifty Shades trilogy. This is part fourth in a four-part series. Read about the inspiration behind the series here. 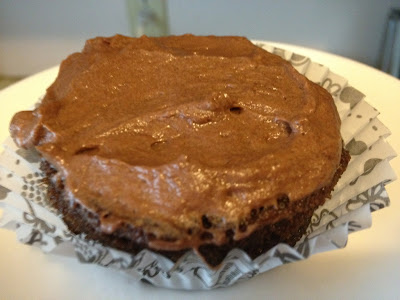 I know a chocolate cake seems simple enough. You open the cake mix, pour it in a bowl, add an egg or three, oil and water, mix it all together and bake for half an hour. Then, you remove the beautiful cake from the oven, say a quick prayer of thanks to Betty Crocker, and you frost it with some canned sugar. Wah-lah. Cake!

But Ms. Steele, being the good little part-time submissive cook she is, baking a cake for her man means doing it from scratch. She did not stop there. While she let the freshly baked cake cool, she goes out to buy fancy chocolate -- apparently expensive enough to warrant withdrawing $50 from her bank account -- to make the frosting. What a bitch.

In actuality, as I learned, baking a cake from scratch is not that hard. The hardest part was finding chocolate fancy enough to meet Ana and Grey's luxurious taste.

For the sake of this recipe, I made cupcakes instead of a cake. My reasoning? Because I seriously do not need to throw down a whole chocolate cake by myself. My non-beach-ready body would hate me if I tried. Plus, it made sharing it with taste testers even easier. And like Ana and Grey, easy is one of my favorite routes, too. (Oh, the puns.)

But back to the recipe. With the exception of the fancy chocolate and whipping cream for the frosting, I had all of the supplies in my cupboard. (Even Mrs. Jones would approve with the baking supplies in my pantry.) So wearing more clothes than Ana did, I hit the store. The whipping cream was easy enough to find, and I allowed myself a few jokes as I picked my container (i.e. "Don't go running out on me if I whip you too hard" and "The safe word is red.")

Laughing at my own wittiness, I wandered to the candy aisle. Somewhere between the bags of M&Ms and gummy worms, I found it. 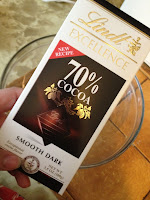 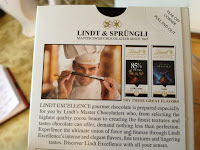 I knew this chocolate had to be good. Not only was it the most expensive available in the candy aisle at my local grocery store (at a pricey $5 a bar), but it has the name "Excellence" in it. Plus, upon looking at the back of the packaging, the picture of the master chef carefully examining the chocolate forced me to acknowledge what the name said all along. This chocolate would be excellent. I was sold. 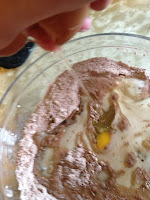 Directions
Preheat the oven to 350 degrees. Grease two round 9-inch cake pans or two regular muffin pans. Mix together dry ingredients. Add wet ingredients and mix with hand mixer for two minutes or until well blended. Spoon the mixture into the pans until more than half filled. If making cupcakes, fill only 18 of the spots.

Place in the oven. Bake for about 30 minutes if using cake pans or 20 minutes for cupcakes. Remove from the oven and allow to cool. After about 10 minutes, remove from pans to cool more.

If making cupcakes, slice the cupcakes in half horizontally. 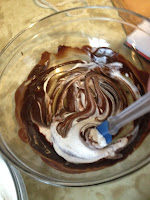 Directions
Melt chocolate in microwave for one to two minutes (but do not overcook). Stir until smooth. Add egg yolk and butter, mixing. In another bowl, whip vanilla, powdered sugar and heavy whipping cream. Fold one third of cream mixture into chocolate until mixed in. Add half of the remaining mixture, folding until blended. Combine the last of the whipped cream and chocolate. 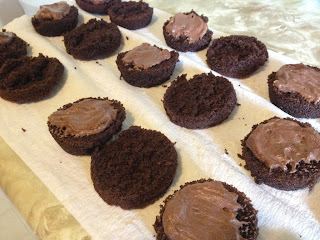 With a spatula, place a thin layer of frosting on top of the bottom half/halves of the cake or cupcakes. Place the top half on top and use the remaining frosting on top. For maximum shine and solidification, chill in refrigerator for one hour before serving.

Like the restrained lady I so desperately want to be (especially if Christian Grey is the one doing the restraining -- boom, another pun!), I managed to share most of these cupcakes with several others. And the response was positive, if somewhat lackluster.

My broomies had the same response when they took their first bites moments after the frosting was done.
Broomie 1: "It's good."
Broomie 2: "Yeah. It's good."

My male office mate was about the same: "I like it."

Then, I shared it with my cake-loving lady office mate. Surely she would be the one to see the light and appreciate what must be a cake worthy of Christian Grey.

Her response: "It's good, but I don't think the frosting tastes expensive."

She might as well have slapped me in the face. Didn't she know that between the fancy chocolate and whipping cream (not to mention the sugar and egg at home) I spent more than $10 making that frosting? We are talking 10 whole dollars. If Grey felt the same way about Ms. Steele's final product, it's no wonder he always has that twitchy palm ready and poised to take a swat whenever he gets the chance.

As it is, the cupcakes were gone fast, and I was not responsible for eating the bulk of them. I call that a success. My friends just need better adjectives.

This recipe is delicious. If I had to bet, I would guess Mr. Grey himself would have found it as appetizing and nearly as satisfying as vanilla ice cream in bed after dinner. I still don't think it would save Ana from a spanking, but then again, what would?

Check out the other recipes from the series: