Blogger's note: Reading in the Kitchen will get a little sexier in the month of May as I make dishes from E L James' best-selling Fifty Shades trilogy. This is part two in a four-part series. Read about the inspiration behind the series here. 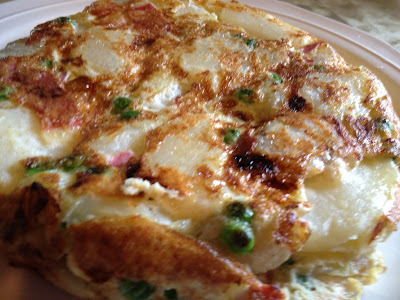 In Fifty Shades Darker, Ana and Christian's relationship goes to new levels. Not only do women from his past reappear, but they get more serious: Ana starts regularly cooking for Christian.

If that isn't commitment, I don't know what is.

After successfully making him stir-fry for dinner, Ana follows-up with a Spanish omelet she whips up for lunch the next day. Following the drama of their morning, this meal serves as an opportunity for Ana and her Fifty Shades to settle their differences like grown-ups... meaning outside of the bedroom.

I will admit, I had no clue what a Spanish omelet was when I read the book. From the description in the book, I knew it involved eggs, potatoes, onions, peas and ham. Sounds good, but how did that make it Spanish? Does it have a sombrero? Do you eat it during bull fights? Would I need to sing Enrique Iglesias while I cooked? I needed answers.

In my research, I discovered a few facts:
- A Spanish omelet (omelette) is also known as a Spanish tortilla. In Spanish, it is called tortilla de patatas.
- It is basically a thick, omelet with a base of eggs and potatoes cooked in olive oil. (Pictures reminded me more of an egg casserole than an omelet.)
- They can be served hot or cold and for any meal. They are a popular picnic dish throughout Spain.
- For a nice variety, you can add just about anything to your Spanish omelet.

Feeling a little less ignorant than before, I made this dish in less than 10 minutes on a busy Thursday evening. Still on my pescetarian kick, I opted to nix ham in lieu of a soy bacon. I knew I was taking a gamble, but we all do what we must. Check out the results. 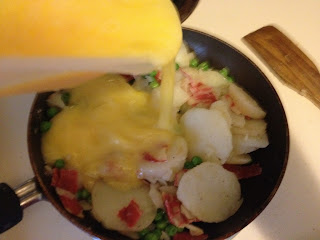 Boil potatoes in advance and place in fridge until future use. When ready to cook, peal the potatoes and slice into 1/4- to 1/8-inch slices. Chop 1/4 onion in small pieces. Defrost 1/2 cup of sweet peas in microwave. Strain. Cook four strips of frozen vegan bacon in microwave. If using previously cooked ham, you can skip this step.

Heat a skillet and 1 tablespoon olive oil on the stove over medium. Once heated, add onions. Once partially cooked, add potatoes, peas and bacon/ham. Stir frequently.

In a bowl, whisk eggs together. Pour eggs into skillet until it covers the vegetable and meat mixture. Stir the eggs a little bit and then allow to set. Cook for three minutes. Then, using a spatula and plate, slip the omelet off the skillet, cooked side up. Using another plate, flip the omelet so it is runny side up. Place the skillet over the plate, and flip so the cooked side faces up. It is OK if you panic a little while you do this. It is even OK if you end up scrunching your eyes and turning your face away from the action in fear while not breathing. No worries. You will feel like a bad ass if you are successful. Allow to cook over heat for another three minutes until cooked through. Remove from heat and serve. 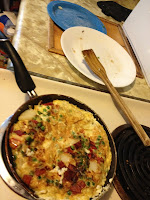 This dish serves two to four (depending on appetites and portion sizes) at about 230 calories per serving (if served into fourths). You can add salt and pepper as desired for taste.

Christian seemed impressed by Ana's culinary skills, giving her the ultimate man's compliment of, "this is good." And I have to agree. I adored this dish. I love eggs, potatoes, onions and peas, and the fake bacon was better than I imagined. I also felt this was a healthier way to serve an egg and potato meal, because the other ingredients were delicious enough I did not need to add cheese (which, let's face it, is both my enemy and friend on the old weight-loss trail). 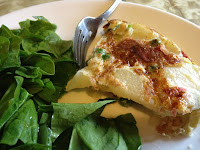 I ate my first serving for dinner with a side of spinach salad. I ate my second serving with Greek yogurt for breakfast the next morning. I ate the final two servings the following days for breakfast, adding a side of fruit or yogurt as desired.

I will definitely be adding this to my regular recipe rotation. So, to the future Mr. Laura Chapman -- or at least the next guy I date -- you can look forward to Spanish omelets for breakfast, lunch and dinner. And maybe if you're nice (or naughty as needed) I'll make your dish with real ham.

Only, I hope I'm not cooking it for you after getting into a wicked fight about your ex-sub getting a gun and being out on the loose hunting for us. That might spoil my appetite, and I would hate to let this go to waste. It was too yummy.

Check back next week for another recipe from the Fifty Shades trilogy. Any guesses?