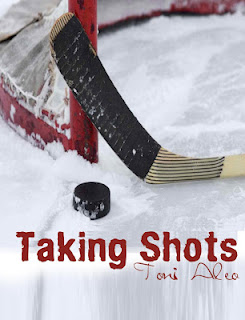 Toni Aleo's Taking Shots has all the sexiness, romance and humor a person could ask for. As far as romantic reads go, this one is perfect for fans of love and sports.

Photographer Elli Fischer has a nasty history, complete with a mostly nasty family, medical scares and a complete dick of an ex-boyfriend. When she catches the eye of Shea Adler, captain of her favorite hockey team and an all-around hottie, she has a hard time believing his feelings are genuine.

But they are. After winning the Stanley Cup the season before, Shea is ready to get more serious about his life. That means ditching the string of one-night stands with ice bunnies and giving his heart a chance to fall in love.

As Shea and his team chase after a championship repeat, he also chases after Elli with hopes of making her see once and for all just how into her he is.

A fun story, with genuinely likable characters, this is a fast read that had me laughing out loud often. Particularly timely now with it being playoff season, this story put me in the mood to munch on nachos, throw back beers and loudly cheer at a hockey game.

I recently fell in love with Brad Richards of the New York Rangers after reading about him in my brother's ESPN magazine, and I frequently found myself imagining him as Shea -- only plus a pair of adorakable glasses. As far as leading men go, Shea is the whole package. He is driven, romantic, patient, family-oriented, not to mention a total hottie. I have myself a big old crush.

While I frequently found myself frustrated with Elli and the roadblocks she put in the way of their relationship, she was still relateable. Any woman with a bad past and self-esteem issues can relate.

Plus the cast of supporting characters are fab. What more could you want?

Worth the read, I will definitely pick up another Aleo novel in the future.

Check back tomorrow for a fab guest post from the author. Read an excerpt of the book here. 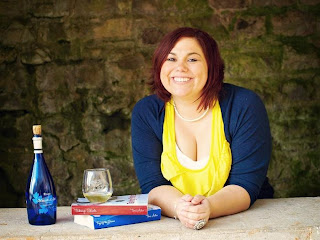 About the Author
My name is Toni Aleo!

I am a wife, mother, and hopeless romantic.

I have been told I have anger issues, but I think it’s cause of my intense love for hockey!

I am the biggest Shea Weber fan ever, and can be found during hockey season with my nose pressed against the Bridgestone Arena’s glass, watching my Nashville Predators play!

When my nose isn’t pressed against the glass, I enjoy going to my husband and son’s hockey games, my daughters dance competition, hanging with my best friends, taking pictures, and reading the latest romance novel.

I love things that sparkle, I love the color pink, and did I mention I love hockey?

I hope to hear from you on here, my Facebook, or my twitter! Thank you so much!