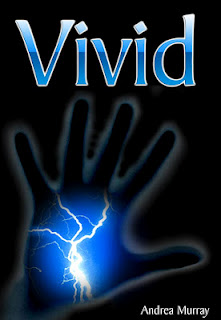 In Andrea Murray's Vivid, a teenage girl must face the reality behind her unique power and the circumstances that left her orphaned.

After years of hiding the secret of her past and her abilities, everything changes for 16-year-old Vivian Cartright following an encounter with a bully at her school. Having witnessed her mother's death when she was 5, Vivian, like her mother, possesses power to control energy.

For more than 10 years she manages to keep only her Aunt Charlotte in the know. But as her power grows stronger, it becomes more difficult for her to control. The realization of her power yields differing reactions from her best friend, Abby, and her boyfriend, Easton. While dealing with this, memories of Vivian's past, and her mother's death, resurface.

Though it started off slowly, Vivid was a fast read once the story picked up steam about 50 pages in. Vivian is an interesting character, mostly because of her unique power. Despite the fact that she generally seems like a nice girl who just wants to be normal, Vivian is also human enough to want revenge on her enemies and to act out sometimes. However, because it took me a while to get into the excitement of the story, it also took a while for me to bond with the main character.

Beyond the mystery surrounding her power and how it affects others, what I most enjoyed about this story was how it addressed bullying. Though a little more dramatic than I remember my high school experience, popular girl Trista and her band of jerk friends are a good example of what teenagers should not be like. They made for good, realistic villains.

And while I was not crazy about Vivian's BFF, Abby, other supporting characters, such as Charlotte and Easton were a good addition to the story. I think the high school girl inside all of us wants to find a guy like Easton.

An entertaining read with a solid cliffhanger ending, I would gladly read a second installment to see what happens to Vivian as she uncovers the truths of her past.

Andrea has been teaching English for longer than most of her students have been alive.  She has taught everything from junior high language arts to concurrent credit freshman composition. She lives in a very small town in Arkansas with her precocious daughter, energetic son, and racecar-driving husband.  When she isn't writing or reading novels for her students, she's probably watching reality television or cheesy science fiction movies.  In addition to Vivid, Andrea has also written Vicious, the sequel to her first novel.