Blogger's note: Reading in the Kitchen will get a little sexier in the month of May as I make dishes from E L James' best-selling Fifty Shades trilogy. This is part third in a four-part series. Read about the inspiration behind the series here. 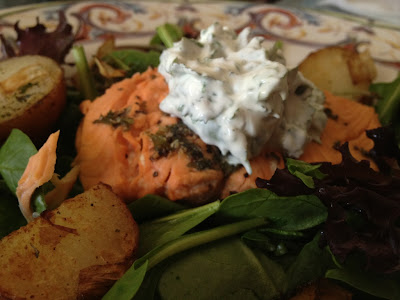 I will tell you one thing I have learned through this reading and cooking adventure — that Ana Steele is a classy lady. She definitely has set a standard for Saturday lunches, which I am confident I will never duplicate.

In Fifty Shades Darker, after a satisfying session with Grey in the playroom, Ana whips up a light lunch... of poached salmon and watercress and cilantro sour cream dip. While it sounded delicious when I read it, I could not help but wonder why Ana was trying so hard. This is Saturday lunch at home, we're talking about.

When I am in a relationship, and a man wants me to make him lunch on a Saturday afternoon, the outcome would probably fall into one of these categories:

Want to know what I am not going to do? Make him lemon poached salmon on a bed of salad topped with a fancy dip and served with boiled potatoes. It is not that I don't care, because I do. I just have more important things to do on a Saturday afternoon than create culinary masterpieces.

Since Ana did slave away in the kitchen to make Christian a well-balanced and delicious meal for his birthday lunch, I decided to give it a shot. It sounded delicious, fit nicely into my pescetarian diet and I already had potatoes from the previous two recipes. Plus, I've never poached salmon, or anything but an egg for that matter. I saw this as the greatest challenge of my kitchen career, or at least one of them.

My worries were for nothing. In actuality, it was ridiculously easy. 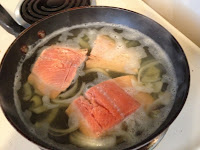 I bought a nice piece of boneless Alaskan salmon and sliced it into three servings. Then, I placed a regular-sized skillet (is there a more technical term?) on my stove over medium-high heat. I poured about one cup of water in. While that heated, I squeezed in the juice from one lemon, added some salt, lemon pepper, sliced onion and a bit of basil for color. Once the water was to a boil, I lowered the temperature to medium heat and placed the salmon in the pan, skin-side down. It looks super gross at first, kind of like the boiled chicken topped with chicken water Lindsey made in season three of Arrested Development. I shook off the disturbing thought and covered the pan and left it to cook for about seven minutes.

While that was going on, I tackled the dip. In the book she says it has sour cream, cilantro and watercress. I know all about the first two — they are delicious and staples in my cooking. But I was at a loss with the watercress. I have heard of it, but it could be anything. Before buying my groceries, I searched on the Interwebs. Through all my research, I learned watercress is a leafy plant popular in Europe. I also learned that it might be difficult for me to find fresh watercress here in Nebraska. 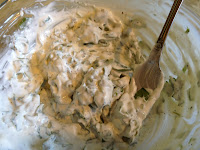 I did what any girl in my position would have done. I called my mom and asked for a substitute. "Arugula." Though not a perfect substitute, arugula is a spicy enough leafy plant to do the trick.

For the dip, I minced a bunch of cilantro leaves and a bunch of arugula. I mixed it with the sour cream and added a dash of pepper, because I worried the arugula was not spicy enough. This made way more dip than I needed for this dish. Even with making three servings of fish, salad and potatoes, I still had more than half the dip left. I used the leftovers with celery sticks and lentil chips for a light snack the next few days.

By the time I was done with this, it was time to turn off the stove. I was pleased to discover perfectly poached and pink salmon waiting for me to eat. I have to say I was shocked. I mean, you see the picture above. That pan looked nasty. And while the watery broth left behind was not at all appetizing, it was exciting to see how lovely and pink the salmon appeared. I may have found a new way to impress friends for dinner. Because fish skin grosses me out, I removed the skin and discarded it before plating. 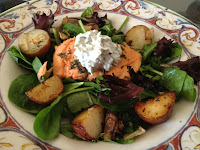 On a bed of arugula-based salad mix, which I found at the local Trader Joe's, I placed a salmon patty and sliced boiled baby potatoes. I added a dollop of the dip on top of the salmon and I dug in.

This meal was fantastic. It was so good, I ate it for lunch twice in the days to follow. A light and flavorful dish, this makes a perfect summertime meal for salmon lovers. While I was selfish and did not share this dish with anyone else, I did pack it along to take to work one day. I had a couple of people, including my boss, comment on how nice my salad looked.

It's hard not to feel smug after someone tells you that. Maybe Ana cooks fancy lunches so she can feel smug from the compliments. The girl may be onto something.