Blogger's note: Reading in the Kitchen will get a little sexier in the month of May as I make dishes from E L James' best-selling Fifty Shades trilogy. This is part one in a four-part series. Read about the inspiration behind the series here. 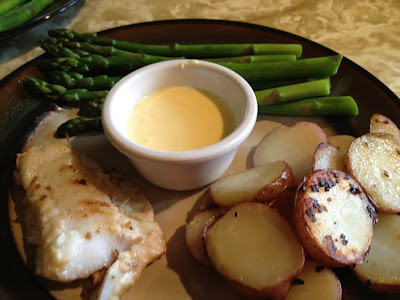 In Fifty Shades of Grey, Christian invites Ana to dinner in a private room at the hotel where he is staying while he tries to recruit her to be his mistress. After polishing off a plate of oysters, Ana and Christian get into the nitty gritty of his sexual contract (yes contract) while eating a delightful course of cod, sauteed potatoes and asparagus dipped in Hollandaise sauce.

During my lunch break, I snuck to the market (chain grocery store) to get the supplies.  I smugly loaded up my basket with fresh Pacific cod and asparagus, organic eggs and red potatoes in preparation for this meal. I did some research before, and I knew I wanted to make a seared fish (cod or sea bass -- whatever I could find), steamed asparagus, easy Hollandaise and potatoes sauteed with onions and garlic. Seemed easy enough.

I invited my sister over for dinner, and though she did not seem impressed by the promise of a sexy meal, she agreed to be a taste tester.

With the prep work done, I anxiously awaited 5 o'clock and the promise of cooking. Once home, I boiled six small-to-medium potatoes. I'm no pro when it comes to boiling potatoes, eggs or pasta, so I left them on the stove for quite a while deciding I'd rather take overcooked than undercooked potatoes. 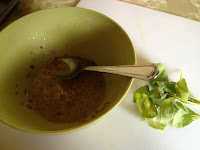 Next, I made the marinade for the fish. In a bowl, I mixed together 3 tablespoons of olive oil, fresh-squeezed juice from half a lemon, 1 teaspoon Dijon mustard, 2 tablespoons minced arugula, 1 tablespoon minced garlic and a pinch of salt and pepper. I sliced the cod into three portions (about 4 ounces each according to the package) and placed it and the marinade in a Ziplock bag. After ensuring the fish was well covered by the mixture, I placed the pouch in the refrigerator to marinate.

While the fish marinated, I sliced about 1/4 an onion and placed it in a bowl with 1 tablespoon of garlic and set aside to mix with the potatoes later. Then, I cleaned the asparagus I would need and set it aside. After the potatoes were done, I removed them from the heat.

Then, I took a break to research how to sear fish and make hollandaise sauce. I found that the best way to sear fish is to make sure you have a thick cut, no less than 2/3 of an inch thick. Also, it is important to avoid cooking it over too high of heat. It creates that overly fishy smell, smoke and releases grease. You do not want these when making fish, apparently. I hoped the cod, and my skills, were up for this task. 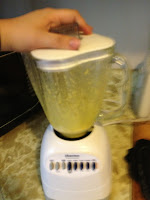 A long-time fan of Eggs Benedict, I looked forward to making Hollandaise Sauce for myself. When you look at the ingredients, it does not sound too daunting. Mostly, it sounded like whisking butter and a few other ingredients together on the stove. I was concerned nonetheless. The sauce really seemed to bring this whole meal together, and I hated to think about what happened if I biffed it. I found a recipe on AllRecipes.com that required no stove and a blender, and I decided to give it a shot.

Naturally, everything with this meal came together quickly and simultaneously at the end. (Have you ever noticed how anything like this always comes down to a few flustered moments?) Instead of giving you the play-by-play, which I frankly don't remember -- I must've blacked out -- you can read the directions below. Even as fast as it seemed to happen, everything came together well.

My sister, Sarah, and I sat down at a table (with our fancy plates, because this was a romantic meal, after all) and dug in. And it was delicious. Even my sister, who is not a fan of hollandaise, enjoyed this particular sauce. She liked it well enough she even dipped her potatoes in it.

"So tell me how this fits into the books," Sarah said.

"Well," I said, "this dish is in two books. In the first, he, you know, wants her to be the submissive to his dominant, and he's telling her all about it while they eat. In the second book, they're together and he wants her to (SPOILER). And, in the middle of this fancy Seattle club, Ana seduces Grey with the asparagus and Hollandaise sauce." 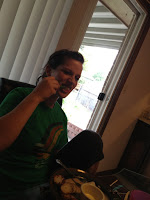 Flushing, as one does when recalling any sexy moment in the books, I threw out some muddled explanation of how she dips the asparagus in the sauce, then licks it suggestively.

Sarah stared at me blankly. She picked up a piece of asparagus, dipped it in the Hollandaise and slowly raised it to her mouth. My eyes widened as she took a savage bite of it. Calmly, she resumed the conversation.

"I don't get why people think stuff like that is sexy," she said. Then she went on to tell me about a friend who thinks girls eating popsicles is hot.

So, whether or not you think dipping and licking foods is hot, feel free to try out this meal for yourself. If nothing else, it is delicious. 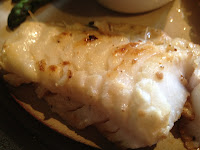 Directions
Mix together all ingredients, except the fish, to create a marinade. Then, place the mixture and fish in a Ziplock bag. Once the fish is saturated, place the bag in a refrigerator to marinate for about one hour.

After the hour passes, place a large, thick, non-stick skillet about the size of the burner it is on over medium-high heat. Add about 2 tablespoons of olive oil. Once this is heated, place the fish on the pan. Cook about two or three minutes -- or until the fish looks done -- and flip. Cook this side and remove from the heat when done. Makes three servings. 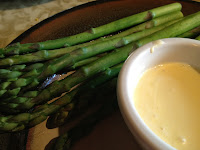 Place the egg yolks, mustard, lemon juice and hot sauce in a blender and mix it for about 5 minutes. Melt the butter in the microwave for one minute. Set the blender on high and add the egg mixture. Watch to ensure it thickens. Keep warm until serving by placing the blender in a bowl of hot water. (Note, this recipe makes about six servings.)

Wash the bunch of asparagus and trim off the ends with a knife. Wrap the washed asparagus in two layers of paper towel. Run under water until the paper towels are damp. Place in microwave with asparagus as flat as possible. Cook for two to three minutes. Remove and serve with side of Hollandaise for dipping. 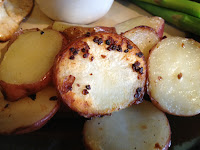 Warm oil in a sautee pan over medium heat. Add sliced onions and minced garlic. While those are cooking, slice boiled red potatoes into 1/8-inch pieces. Place those in the pan along with salt and pepper. Cook until potatoes are browned. (They should already be cooked). Makes about three servings.


Check back next week for another recipe from the Fifty Shades trilogy. What will it be? Stay tuned!