sexy reads and eats ahead 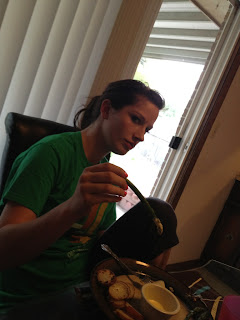 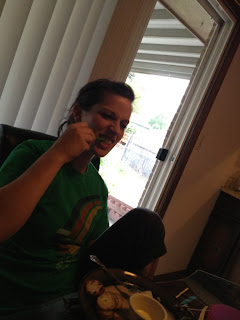 I had a dream last week. In it, I was a young, impressionable twenty-something without much experience in the way of men. A slightly older, attractive and successful man took me out for a romantic meal. We ate seared cod, sauteed potatoes and asparagus dipped in hollandaise sauce. At the end of our meal, he had a proposition for me: become his kinky love slave and the world would be mine.

While I contemplated his indecent proposal at some shops, hidden cannons from the Capitol began shooting fireballs at me. As my suitor and I dodged the attack, it appeared on screens for everyone across the nation to watch.

"Will you stay with me?" the hottie asked as we hid behind the ruins of a stone wall, his arm draped around my shoulder. "Will you fight against the Capitol and go into hiding with me as my lover and fellow rebel? I never thought I could need someone like you this much."

I had barely agreed to unconditionally go anywhere and do anything as long as it was with him when my alarm clock went off. Instead of taking this crossover dream as a sign that my obsession with the Fifty Shades and Hunger Games trilogies have gone too far, I came to another realization. I must offer devote another month of Reading in the Kitchen recipes to commemorating the awesomeness that is Fifty Shades. (Hunger Games already had its run.)

Fortunately for me, when Ana and Christian aren't getting freaky or fighting about something, they seem to be constantly eating in these books, so I was at no loss to select four foods and one adult beverage to feature in May. I am super excited, and I hope you are, too, as we hop aboard the sexy food train.

So get prepared people. Food is about to get pretty damn arousing this month. Just look at my beautiful sister, pictured above, illustrating just how seductive asparagus dipped in hollandaise can be.