Blogger's note: Reading in the Kitchen got sexier this month with dishes from E L James' best-selling Fifty Shades trilogy. Today, we close-out the series with a Reading in the Bar entry. Read about the inspiration behind the cooking series here. 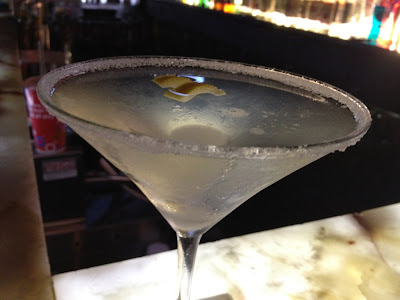 There are a few defining "firsts" in a woman's life. The first day of work. The first date followed by a first kiss. Her first love. Her first heartbreak. The first time she throws a cocktail in another woman's face in a fit of anger.

In E L James' Fifty Shades trilogy, Ana Steele encounters each of these firsts. And thanks to two of my very good friends, I got to live the last. Yes, that's right. I threw a drink in another person's face. Just like Ana threw her lemondrop cocktail on that skank Mrs. Robinson in Fifty Shades Darker. What a rush.

But before I get ahead of myself in spilling all the details of spilling the contents of my martini glass, let's head to the bar to mix ourselves a drink.


Part One: Getting Buzzed 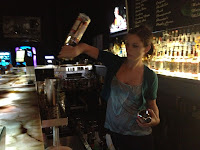 Over a dinner of seared cod, potatoes, asparagus and hollandaise sauce, I told my sister, Sarah, about my desire to recreate a strong, powerful and delicious lemondrop cocktail. The rock star bartenderess that she is, Sarah invited me to visit her the following Sunday evening at the bar where she works. Sundays are usually slow early in the evening, and considering that I had to work the following morning, going in for an afternoon drink seemed like a good idea.

As we researched possible drink mixes I had only two requests: "It needs to be strong. And it needs to be delicious."

And got it she did. Check out her recipe. 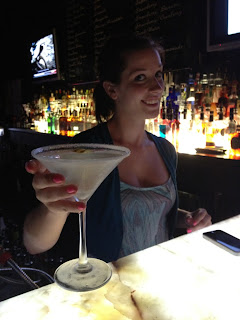 Fill a cocktail shaker with ice. Pour in vodka, counting to five as you do. Pour in triple sec, counting to two. Sprinkle sugar and add a splash of sweet and sour mix. Shake, shake, shake the cocktail. Rim a martini glass with sugar and pour the contents of the shaker in it. Add a twist of lemon. Drink responsibly.

This beverage was delicious. It was chock full of alcohol, but the taste was not overpowering. I think the touch of sugar and sweet and sour hid the potency of the drink, which is a good and bad thing. Good, because it went down easily and tasted fantastic. Bad, because it went down easily, and I got a little silly and decided to order another round of drinks staying out much later than an alleged grown-up should on a Sunday night.

Kudos to my sister, the best bartenderess in Lincoln, for a drink well made.

Fresh off of the success of this beverage, which required almost no effort from me (besides losing a bit of sleep during a night out), I wanted to delve even further into my Fifty Shades world and take this drink to a new level. I wanted, no needed to experience the thrill of throwing a drink in another person's face. It's something I've always wanted to do (for serious), but good manners and a fear of getting in trouble had thus far prevented me from seeing this dream through. I wanted that to change.

My decision made, the next step was to find someone half as crazy as me and willing to help. After receiving less than promising responses (but not a hard "no") from two of my friends I had an epiphany. I would ask my writing buddy Jacie. A fellow writer, Jacie is all about new and different experiences and frequently humors me in my "research." Plus, she is one of those wonderful people who seems to find laughter in just about every situation. If she agreed to do it, I knew we would end up having fun, too. And because she is such a good sport, I was willing to make a sacrifice, too.

"Jacie," I called out, walking down the hall from my office at work to her's. "Will you do me a favor?"

"Will you let me throw a drink in your face," I asked. Her mouth dropped open a little, and I took her momentary shock as an opportunity to finish my pitch. "It's for my blog. I recreated a drink from Fifty Shades and now I need to throw one in someone's face, because that is what happened in the book. And if you do it, I promise you can throw one at me, too."

"I can throw a drink in your face if I let you throw one in mine?"

What a good friend. The next evening, with an abbreviated version of Ana and Mrs. Robinson's conversation and a glass in booze in hand, Jacie and I recreated the scene. Watch for yourself.


Not to brag, but I am damn good at throwing a drink in a person's face. I mean, did you see that technique? I took that booze and made it my bitch. And talk about a rush. I don't remember when I have ever felt more alive than at the moment I aimed, extended my arm and let that drink fly. Even though it took less than a second, I swear time slowed down. It was beautiful.

I'll be damned if I don't want to do it again. I've tasted the thrill of a true bitch fight, and I liked it. Unfortunately, my sister, who shot the video, assures me that she will kick me out of her bar if I ever do it there. I guess nepotism means nothing these days.

For her part, Jacie took it like a champ. Seriously, what a pro.

And, because I am a woman of my word, I let Jacie throw alcohol in my face. Twice, in fact, because the first time she missed and hit my shoulder and ear. Watch it here.


That one cracks me up to watch. Not only do I scream like a little girl, but you also get an audio cameo from one of the broomies ("Awe, you missed!"). Plus, it's more like a scene from America's Funniest Home Videos than anything. I have a good enough sense of humor to laugh at myself and my ridiculousness now that it is done.

I'll admit it, as fun as it was tossing a drink on Jacie, it was also pretty funny having it done to me, too. As predicted, we laughed a lot, and I smile every time I think about it. And now that I know what it is like to be on either side of it, I may just have to write a drink toss into one of my books.

Thank you for following this series. Reading in the Kitchen and Bar will be back next month with all new culinary/mixology adventures inspired by books. I would like to thank everyone who acted as a guinea pig or research assistant on this project. You never know how good of friends you have until they willingly eat anything you put in front of them or agree to take a drink to the face. I am a blessed woman indeed.


Check out the other recipes from the series: