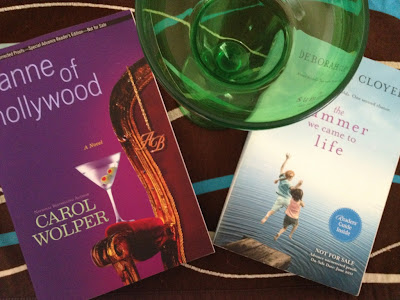 It's my birthday month, bitches!

Because I feel so blessed and love you readers so much, I want to share some of the love. This month, I will give away two books to two luck readers.

Step One: Post a comment. You can say anything, but it should probably be something about how much you adore me and the blog. :) Also, make sure you include your first name and at least your last initial or something to distinguish yourself from other entrees.

Step Two: Live in the U.S. or Canada. Maybe next year I'll be a big baller who can afford international overseas shipping, but not yet.

Step Three: Check back Friday at 6 p.m. CDT to find out who wins. You will then have 72 hours to email me with your full name and address so I can send you the winnings.

People will only be entered in the drawing once a week, but feel free to come back next week and try again.

This week's winners will receive Advanced Reader Copies of Carol Wolper's Anne of Hollywood and Deborah Cloyed's The Summer We Came to Life.

Skirts may be shorter now, and messages sent by iPhone, but passion, intrigue, and a lust for power don’t change. National bestselling author Carol Wolper spins a mesmerizing tale of a twenty-first-century Anne Boleyn.

Wily, intelligent, and seductive, with a dark beauty that stands out among the curvy California beach blondes, Anne attracts the attention of Henry Tudor, the handsome corporate mogul who reigns in Hollywood. Every starlet, socialite, and shark wants a piece of Henry, but he only wants Anne. The question is: can she keep him?


The Summer We Came to Life


Every summer, Samantha Wheland joins her childhood friends—Isabel, Kendra and Mina—on a vacation, somewhere exotic and fabulous. Together with their mixed bag of parents, they've created a lifetime of memories. This year it's a beach house in Honduras. But for the first time, their clan is not complete. Mina lost her battle against cancer six months ago, and the friends she left behind are still struggling to find their way forward without her.

For Samantha, the vacation just feels wrong without Mina. Despite being surrounded by her friends—the closest thing she has to family—Mina's death has left Sam a little lost. Unsure what direction her life should take. Fearful that whatever decision she makes about her wealthy French boyfriend's surprise proposal, it'll be the wrong one.

The answers aren't in the journal Mina gave Sam before she died. Or in the messages Sam believes Mina is sending as guideposts. Before the trip ends, the bonds of friendship with her living friends, the older generation's stories of love and loss, and Sam's glimpse into a world far removed from the one in which she belongs will convince her to trust her heart. And follow it.


Happy Laura's Birthday Month Giveaway. May the odds be ever in your favor.

Email ThisBlogThis!Share to TwitterShare to FacebookShare to Pinterest
Labels: prize