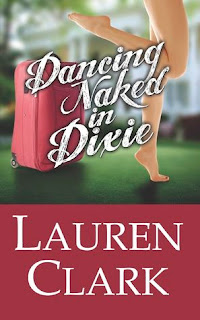 Lauren Clark is back with her sophomore novel, Dancing Naked in Dixie, a story about an adventurous woman who has one last chance.

Julia Sullivan is a travel writer accustomed to a life of passports, hotels and international flights. That comes to a sudden stop when her new boss sends her on assignment to Alabama with the understanding that she do well or lose her job, because of the lack of quality in work as of late. Though annoyed, Julia realizes she has no choice but to do well or say hello to unemployment.

Once in the small Alabama town, Julia finds more than she bargained for in the cast of quirky characters, including a new romance with a southern gentleman/historian.

At its heart, Dixie is a story about a woman seeking redemption personally and professionally. A likeable and relateable character, Julia is someone you root for and want to see succeed, much like you would a good friend. The situations she lands herself in are a good mix of humor and intrigue, which made this story fun to read.

The supporting cast to this story is also well-written and delightful to follow -- especially the ultra hunky and totally crushable Shug Jordan. More than a hunk, Shug proves that historians can be sexy.

Clark did a great job at capturing the spirit of the Deep South with her other supporting characters and setting. Though I enjoyed her debut novel, Stay Tuned, Clark's second work is even better. Dixie proves she is developing more as an author, which is great to see. I look forward to her next release.

This is definitely a book to enjoy at the beach or pool this summer while you sip on some sweet ice tea. Actually, I'd suggest you stick to regular, fresh-brewed ice tea. I'm too much of a Yankee to spoil tea with sugar.

About the Author
Lauren Clark has been a voracious reader since the age of four and would rather be stranded at the library than on a desert island. In her former life, she worked as an anchor and producer for CBS affiliates in Upstate New York and Alabama. Lauren adores her family, yoga, her new Electra bike, and flavored coffee. She lives near the Florida Gulf Coast. Visit her website at LaurenClarkBooks.com.